I don't know whether David Vann's around the world journey is a good or bad thing. It's probably unsafe but it's just him, no impressionable inexperienced naive first mate. SAR might have to rescue him but that's their job. He's kind of self-indulgent but at least he's not trumpeting his voyage as an inspiration to NASA. My gut feel is that he's somewhat imbalanced but doing something cool.

And I know that Lonnie Bruner doesn't agree with that.

But, regardless of any of our opinions, something cool just happened on Sailing Anarchy. There was just a live thread of David Vann's departure aboard Tin Can. Multiple webcams following his exit from the Bay, two professional maritime photographers taking pictures, and SA's usual dialogue on the subject.

I grabbed one photo off of the webmarin cam and one off of the thread that somebody got from "somewhere". 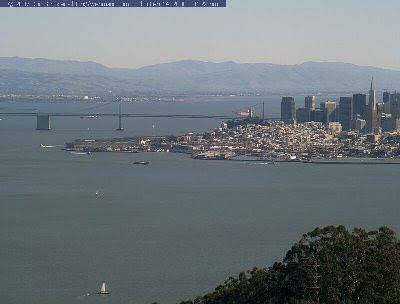 As he left Richardson's Bay. 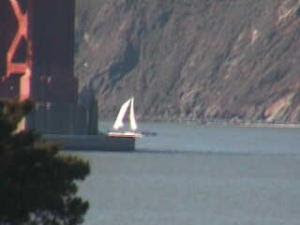 And as he left the gate.

Check the time stamp of this post, this is some real-time "stuff". Anyway, Bon Voyage David Vann. Good luck, fair winds, and don't fall overboard. And keep the red side down.

Update: ~3:30P: Apparently, the Coast Guard is boarding Tin Can about a mile off of Pt. Bonita.

New Update: According to Peter Lyons, the Coast Guard boarding produced "zero violations" and he was on his way.

"SAR might have to rescue him but that's their job."
As a Navy veteran I can tell you that it's not a job, if it were the sailors and coasties who fly those missions would be highly compensated for risking their lives to rescue the thousands of folks who get in over their heads.

I agree with you that he is doing something cool. I don't know if he's imbalanced, he might be looking for some good old fashioned adventure.

Joe, you're right, I was just trying to boil down something very complex to one sentence since that wasn't the point of the post. But if not addressed even peripherally, everybody on either side of that issue would have jumped on it and not read the rest of the post.

The SAR guys are amazing no doubt.

I agree with the first part of what Joe said.

When I heard about all this, I bought his book, A Mile Down. It is a page-turner and if you read that book, you'll understand that this new voyage is most likely an attempt at gaining material for a new book. He was a struggling English professor who couldn't move up because he wasn't published. He got A Mile Down published, which was mildly successful. I'm sure he's doing this with the main idea of getting another book published which will be more successful than the last so he can pay off his HUGE debts --- the sole result of his idiotic and selfish sailing mistakes of the past. Actually, I bet he hopes to have a disaster at sea and to be rescued --- of course, at the expense and risk to life of SAR, etc. Just look at the design of his boat!

Edward, seriously, read his book. This guy is a fool.

I have more respect for Reid; at least he knows how to sail. He's got some nutty ideas, but generally he doesn't have a "disastrous career at sea", as Vann brags in his subtitle.

Read this review. It's perfect, except it doesn't mention his obsession with his father's suicide and the constant implication that he may want to do it himself.

Holy cow Bat Mite, I read the thread on SA that Lonnie linked to. Dog can you say Reid? How do these guys manage to get people to fork over money for these "glorious" misadventures?