Wind? It's Not So Bad

It's been a running theme on this blog that my son is scared of wind, sailing, and even the thought of leaving the dock. I do what I can...we hang out at the boat, he has pirate gear, and I feed him well. But he's always had issues with the boat.

This weekend, we may have had a breakthrough. We did our normal routine on the boat: play with the pirate stuff, play with the winches, snack, and read his space books. But he did more this time. He played in the v-berth, sticking his head out of the hatch like a meerkat. He went on deck, inventing a game where he goes on the foredeck, I drop him through the hatch and we race to the cockpit. Did I mention he went on deck? Believe it or not, that was his first time on the foredeck.

But that wasn't the coolest thing. I think he got over his wind-o-phobia. Remember The Freshmaker? 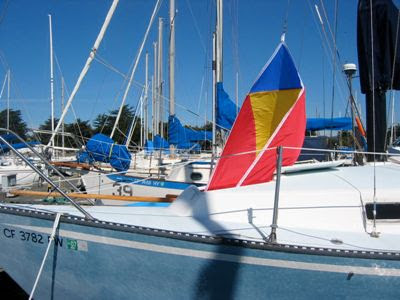 After I set that up, he played Wind Tunnel. He would stand up in the scoop and yell "WIND TUNNEL" as loud as he could, reveling in the 10 knots of breeze flying down into the v-berth!

my friend Larry had the same issue, but his little one eventually came around and now goes on the boat. I'm not sure he's wiling to do an overnight yet, but as he becomes more rational I expect he'll be into it.

And once he discovers girls...

Small steps are better than no steps...

Ahh, the wind scoop! That is one of those things I remember loving on the boat from my youth. As he grows I'm sure he'll start appreciating this and that and then finally, kaboom, he's hooked.

After all, when I was 15 all I wanted was a Donzi. Now look at this obsession I call sailing!!

Hey, Will and I are heading to SF the first week of May and are dying to do some sailing. Is there anything going on around then for sailing? Is this a feasable time to get onto SF bay? Any suggestions for where to go about chartering a boat or finding an opportunity?

There is a ton of sailing going on out here in May, the summer winds are just starting to really get going, you're almost guaranteed 15-25. I could recommend a couple of charter facilities but I think I'd rather invite you out for a sail if you don't mind stepping down a bit in the luxury department.

My email address is in your blog comments if you want to drop me a note.