The Hard Way to Hawaii

In today's 'lectronic latitude, there was an article about an abandoned San Diego boat that ended up in Hawaii. Very sadly, it appeared that the guy must have either fallen or jumped overboard and is presumed dead. The article speculates that there was a fire and he abandoned ship.

What's interesting is that this happened off the coast of San Diego. And the boat was found in Hawaii approximately two months later. This is the second time I've heard about a boat abandoned off the coast of North America ending up drifting its way to Hawaii. It gives a lot of hope for my navigation efforts.

The bad part is that while drifting to Hawaii, the boat was dismasted. But that could have a lot to do with the storms out on the Pacific in the Winter. 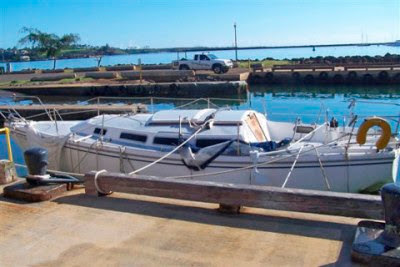 Sad to hear a sailor going out that way, my condolences to his family and friends.

You should read about the guy who paddled a kayak from California to Hawaii.

I've heard that some sosphisticated navigators have a secret trick for finding their way to the islands... following jet vapor trails.