I received this email from my Father in response to my previous post:

"Your resolutions are good ones. However, there IS a safe way to swim from a boat that's becalmed.
If you are thinking of sharks, rather than the boat sailing off by herself, the odds are so nil as to be non-existent. The middle of the ocean, especially the area around a high (as in Bermuda/Azores high) is almost empty of marine life as compared to parts nearer shore, or in he colder climes."

It's the last point that is almost what worries me. Unfortunately, this is like telling a kid, "there is absolutely no way Dracula is hiding in your closet". You can't prove this negative, Dracula isn't there when YOU look.

See, I don't worry about the boat sailing away and I don't worry about sharks. I worry about what COULD be down there. The unimaginable, the Sea Serpents, Neptune, the miscellaneous scary creatures, the Giant Squids. There is a very real chance that one of them is somewhere in the 20,000 feet of water underneath me. Just because nobody has ever seen any of these before doesn't prove that now, while I'm in the water, won't be the first time.

I've been in the water in the middle of the ocean before. My Dad was the "vigilant person on deck" and my girlfriend and I jumped in the water for a swim. It was cold but that wasn't the problem. At the moment I hit the water, I could envision every cubic milliliter of water underneath me and all the scary things that could be in there. And there were lots of these scary things. And for proof that the impossible can happen, I literally flew back onto the boat without touching the boarding ladder at all. I flew. Like one of the Sea Creatures probably could. 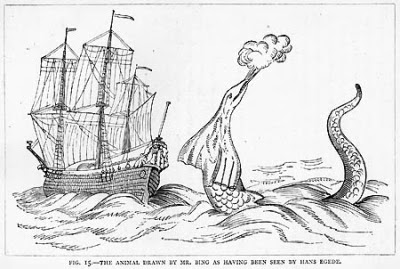 The only reason I know I'm not crazy that something was down there was that Susannah knew it too. She actually beat me back on deck.

Your fear sounds a bit like my wife's fear of the water. Whenever she is swimming or sailing in deep water she focuses on the huge depth below her. It's almost like a fear of heights.

To me there's no difference in swimming or sailing in 8 feet of water or 8,000 feet. I can't touch the bottom so what's the difference? But to her the huge, dizzying, empty depth beneath her is a frightening thought.

Why does your Dad write emails with yellow ink?

He only writes that way when being published on a green background.

Being afraid of deep water is just as irrational as being afraid of suffocating from being at the bottom of the ocean of air we call our atmosphere.

First, you are DAMN lucky you have a dad who sails. My dad gets seasick standing on a dock!

Second, think like a scientist: the odds are overwhelming for you while swimming in the middle of the ocean. Most of the predators in the ocean are searching for food they normally see --- not your pale legs kicking underwater.

Lonnie, think of it from the point of view of the Predatory Sea Serpent. For decades you've been living on a steady diet of plankton, whale and mermaid leftovers. Suddenly, only a couple of thousand feet above you, there are a couple of tantalizingly tasty pale legs kicking underwater. Deep in your primeval brain, some synapse fires, mmmm, those are tasty.

It's like a delicacy to these creatures, just rare enough to be worth heading to the surface for.

Oh crap, Lonnie, one other thing. What the hell are you waiting for? Please check out this link for a crewfinder. Go sailing young man.

You're describing an irrational fear. The liklihood of the existence of sea serpents is the same as that of bigfoot. It's like my wife being afraid of shark attacks while swimming in the Chesapeake. There's never been one recorded attack on swimmers there.

Actually, now I'm not even sure if you're serious with this stuff!

I don't race. I did one "beer can" as an NPR race but that's it. I have plenty of crew to select from, but I'm looking more for a drinking partner who doesn't get seasick, rather than a racer.

Also, the sailinganarchy forums left a bad taste in my mouth with regards to many people who care about racing; they just seem like a load of cocky jocks to me. That's antithetical to the sailing spirit by my judgement.

"It really blows on San Francisco Bay. During the winter, which is the best cruising season, we have southeasters, southwesters, and occasional howling northers. Throughout the summer we have what we call the "sea- breeze," an unfailing wind off the Pacific that on most afternoons in the week blows what the Atlantic Coast yachtsmen would name a gale. They are always surprised by the small spread of canvas our yachts carry. Some of them, with schooners they have sailed around the Horn, have looked proudly at their own lofty sticks and huge spreads, then patronisingly and even pityingly at ours. Then, perchance, they have joined in a club cruise from San Francisco to Mare Island. They found the morning run up the Bay delightful. In the afternoon, when the brave west wind ramped across San Pablo Bay and they faced it on the long beat home, things were somewhat different. One by one, like a flight of swallows, our more meagrely sparred and canvassed yachts went by, leaving them wallowing and dead and shortening down in what they called a gale but which we called a dandy sailing breeze. The next time they came out, we would notice their sticks cut down, their booms shortened, and their after-leeches nearer the luffs by whole cloths."

Now I'm suffocating under the weight of all this atmosphere. It feels like I'm being crushed by a weight of 20 tons. Thanks Lito.

Not to worry; we're all here for you. With sharks, I've heard that it's helpful to not act like a wounded fish, so thrashing around, hanging onto a bunch of dead fish, or doing a seal imitation is definitely out. And, sharks and other marine monsters may be "programmed" to seek out familiar prey. In general, predators look for something they know to be edible and not too dangerous, and are leery of anything that looks exotic. The more aggressive sharks may circle around to try to figure out whether you might be good eatin', but most sharks are quite uninterested in manflesh.

But, to my mind, the ocean seems a far less likely venue for a devastating shark attack than a district courtroom or law school.

Speaking of which, did you hear about the boat that grounded off a tropical island. The skipper was afraid to swim across the lagoon to shore to call for help after seeing dozens of predatory fins slicing through the water, but his buddy assured him there was no danger. Sure enough, as they swam the fins parted before them and they reached shore unmolested.

The skipper was amazed. He asked his buddy how they got past dozens of man-eating sharks unscathed. "Simple," the buddy answered. "Professional courtesy; I'm a member of the state bar here."