After the oil spill, I was on edge, just completely sick about what the spill had done to the Bay, to wildlife and the ecosystem, and lastly my boat. Due to family commitments I wasn't able to get down to the marina for 4 day after the spill. When I got there, it wasn't anywhere near as bad as I thought. It still sucked but it wasn't the Valdez or 3-mile Island bad.

I immediately sent a note to my next-slip neighbor telling him about it and that his boat was OK. He had been there immediately afterwards and was one of the good citizens who broke the law to help the birds without training. Apparently, in those first days it was really really bad. Amazing that in 4 days it had dissipated that much.

Well, in the subsequent weeks, marina closures and more family commitments kept me from sailing but when I finally did go out, it was hard to find any trace of the oil. Except where it was stuck in the slips, I just didn't see any. The only trace you could find was this: 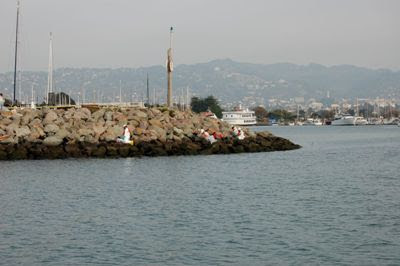 White hazmat suited workers cleaning the rocks drop by drop. From what I understand not much of the oil will sink so I guess the best opportunity to get it is during low tides, get it off the rocks. Damn the Cosco Busan.

Edit: close up of "The Cleaners" since you can't see them in the above photo. If it looks like the one in the middle melted it's because he did, this stuff is toxic. 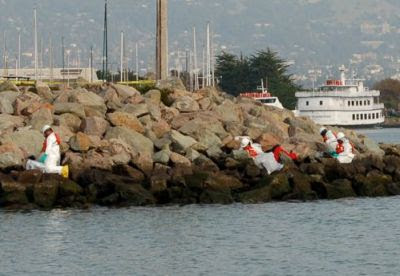