I have the unenviable task this week of calling my father and letting him know that he'll miss out on his lifelong dream of singing a Jimmy Buffett song. I can't even imagine the disappointment he'll feel. I also can't imagine he ever saw the allure of a nice a cappella "Son of a son of a sailorman." But I'm sure he'll still be disappointed.

My son just isn't going to be a sailor. I saw it clear as day last night.

We were leaving a store in San Francisco, as I opened the door a gust of wind hit us. Noah looked up in horror, shrieked "wind!", turned on a dime and scurried back into the store. He wanted no part of this evil spirit known as "wind." He hurried his little self back into the safe harbor most people know as Cost Plus World Market rather than brave the ferocious 5 knot windstorm brewing outside.

A short eight hours earlier I had taken this picture of him confidently holding the tiller. Once he sees the connection between this fine piece of nautical equipment and that nefarious zephyr of wind, my Dad's dreams of singing Jimmy Buffett at a karaoke bar will be lost forever. 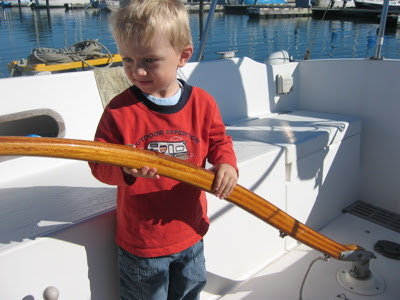 even in the world of Superblogdom, saddness shows it face.

and castles made of sand, melts into the sea...

Sounds like a smart kid to me. He already knows that a 5 knot wind is to be avoided at all costs.

I have the opposite problem. My daughter seems to have always loved wind. She always gets excited and says, "Windy" when she feels a breeze on her face. However, she refuses to sit on my boat.