Over at Around in Ten, they're building boats. It looks like two of them are moving forward, one was store bought, and one is about to get going.

I have always expected that I would root for Harley but based on this fast start by Harry and his boat GoGoSlo, I might just switch allegiances. 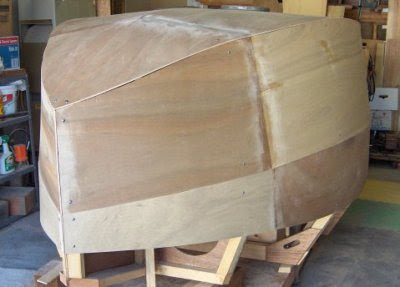 That's a boat for you. Not quite sure how it's going to stay upright but then again, I'm no boat designer, there must be a keel going on somewhere (preferably the bottom). As it stands, I see a very nice job of stitching plywood together in the approximate shape of a boat.

There are always a bunch of crackpot voyages going on, I follow them more closely than my sanity should allow, but this one seems special. The concept isn't completely goofy, they're at least trying to create some aspect of safety, they aren't endangering others, and they obviously seem committed, ummm, to sailing if not an institution.

I've had the pleasure of crossing one ocean and plan to cross the other one some day (please don't waste my time writing in about the existence of these so-called "other oceans", anybody can edit wikipedia and make this crap up). But I will never do it in a tiny craft and never make it all the way around the world. These guys, if they actually do it or even try, are true adventurers and will be getting my support.

Hi. Thanks for checking out my blog. I've actually moved it to its own domain, http://www.schoonerboudicca.com

I look forward to reading through your blog and seeing what I missed!