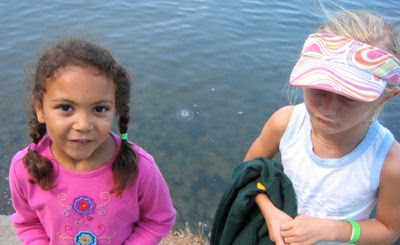 Our sail on Sunday was remarkable. And not just because we saw jellyfish on the beach. What was remarkable was that we were on a beach. In San Francisco. In September.

The weather was so out of the ordinary that we had a choice of drifting to Angel Island or motoring. Barely a hint of wind. We're spoiled out here, 15 knots is considered light in the summer. To not have anything was astounding. We ended up with zero sail time on the way to Angel Island.

Once we got there, it was a beautiful sunny day. The kids played on the beach, even frolicking up to their knees in the water. We spent over 2 hours there until, out of nowhere, I felt something oddly familiar. It was blowing my hair and bringing a bit of refreshing coolness. What was that called again? Oh yeah, wind!!!

Captain Edward sprang into gear, "kids, pack up, meet me at the boat in 2 minutes!!!"

And we were off. We backed out of the slip, raised sails, got out into the channel, gybed and headed home. By now, it felt like normal, 15-20 knots from the West. I gave the tiller to Mark and pointed him in the direction of Berkeley and we had a perfectly thrilling ride.

What's crazy about the trip from Berkeley to Angel Island is that you do about 90% of your trip there close hauled on port, then a few tacks up Raccoon Straits. You do about 95% of your trip home between a beam and a broad reach on starboard. Sunday we didn't even need to gybe near the marina, that one tack brought us exactly to the marina entrance.

Mark said something quite telling, "You have picked a very worthy thing to be passionate about." It was just that kind of day, the kind that gets you hooked on sailing.

Aaarrrhhh, today be national Talk Like a Pirate Day. It might behoove ye to make merry, gi'en that ye are so enamored of the pirate way o life.

And on a related note,
AVAST, ME HEARTY!! I hoist a RUM in y'r honor today!