While relaxing after putting the boat away last weekend, the local diver came by in his stinkpot. Since I still owe him $50, he stopped to chat. I pointed at the Coast Guard boat that was escorting a dismasted boat into the marina and told him that I'd seen the CG boat flying out about 30 minutes before at something like a quazillion knots.

He wondered aloud if the dismasted boat was the one he was on his way to help. Apparently, he had received a call from a boat that had run aground on the Berkeley reef and needed help to get off. I said, "you mean the pier?" He said, "no the reef." I said, "you mean the submerged pilings in the pier?" His reply, "no, the reef." Then he finally left to go help this guy. 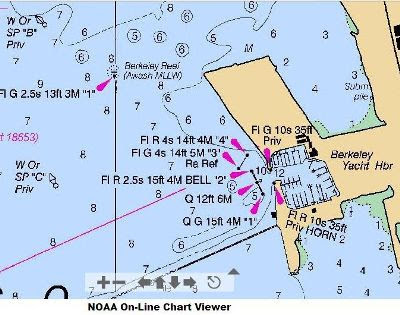 Sure enough, there's a reef there. Marked with a green flashing light. And apparently awash at mean low low tide. I know that marker. I've been within a hundred feet of the thing (never on the lee shore side though). It's conceivable that I'll be back over there some day.

I'd better find out more about how big it is. My friend mentioned 25 feet wide but the chart doesn't make it look that big. I'll ask around the dock. What I'm pretty sure will happen is a repeat of my "who's on first" conversation..."hey did you know about the berkeley reef?" "you mean the pier" and so on.

We'll see, maybe I am the worst sailor ever. I know most obstructions on the bay but just not the one closest to my marina? Maybe I should head over there this weekend and use my keel to sound out this so-called "reef".

Not to be confused with the Berkeley reefers.

Indeed, there is reef, we were pulled off it last sunday. It was painful ending to an otherwise great day of sailing.