A few weeks ago, I was motoring steadfastly through a mooring field with my crew on the bow, boathook and docking line in hand. All of us looked absolutely terrified of this situation not having ever done it before. The mooring field was probably like fifteen, maybe twenty, percent full so on top of the beginnerness, there were the terrifying crowds to contemplate.

I had sent Camille below knowing that at any moment hell could break loose, boats could sink, insults could be hurled, the sea could boil. At least one of these was bound to happen.

Then, we nosed up to a ball, Grant grabbed the ring with the hook, Kathy looped the docking line through the ring, they tied it off, and we were moored. Couldn't have been easier, so Camille was summoned, water bottles were opened, and general merriment commenced.

About 30 minutes later, another boat came through, repeating our process. Except they didn't look scared, very little panic was happening in the cockpit, and I'm pretty damned sure their merriment began a bit early.

And then I saw why. Up on the bow was the grizzliest son of a gun sailor you'll ever see. Standing nonchalantly on the bow, holding his boat hook in one hand, tin coffee cup in the other, this guy was wearing 40 year old oilskins, a knit sweater and an orange watchcap for greater visibility. And the beard. Good Lord, the beard. He had the most frazzled grey salt-encrusted beard on Earth. Frickin' Melville and frackin' Hemingway used this beard as their inspirations.

Here's a statue of the caricature of this man: 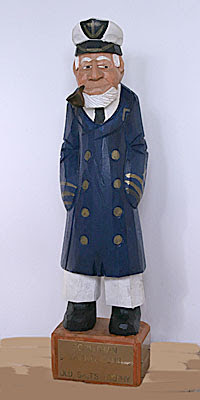 And I realized if I'm ever ever ever going to be the Yachtsman that I aspire to be, I need to get me one of those. Not the statue. I need a Grizzly Old Guy (GOG) by my side during these complex maneuvers. I need his steadying hand and infinite wisdom to help answer the Unanswerable Questions of the Sea (e.g. Angel Island or Alcatraz today, crew?). Oh boy, you can bet your bottom dollar I'm getting me one of them Grizzly Old Guys.


put a homeless guy to work. he could just sit there and look salty, insperation , would just come to you :-)

You neglected to mention ... did the grizzled old salt successfully pick up the mooring buoy?

Carol Anne, you are one very astute reader. After they cruised through the mostly empty mooring field a few times with GOG showing off his "look", they headed over to the dock, not sure if they paid the $10 docking fee or not.

Zen, good idea on the homeless guy but he needs to have oilskins.

I have a beard and oilskins.. all i need now is the salt (and the lime and I'll ride the worm to greatness)