The big nautical news this weekend here in San Francisco was the Queen Mary 2 coming and going. I didn't go out to see her arrival (clearing the Golden Gate Bridge by a scant 30 feet) but all the sailing press covered it well. And, according to this photo from Latitude 38, many sailboats were out there checking out the action. 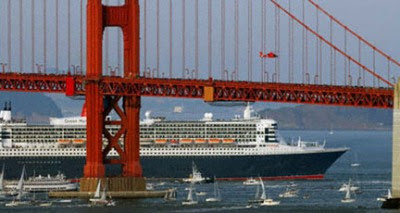 There were two reasons I didn't go out for the spectacle: 1) I had sick kids at home, and 2) I've seen cruise ships much more closely than I ever want to again.

Cut to the Mid-Atlantic circa 1992, we were on a pleasant beam reach with medium breeze, fairly flat water, and sunny skies. My Dad was on watch (important point) and I was up in the cockpit keeping him company. The day before we had seen about a dozen whales, countless dolphins, and a pod of what we believed were pilot whales; we had a chart out and were trying to figure out if we had just hit the contintental shelf or maybe were directly on top of Atlantis. Good discussions and frankly one of the best moments of the trip for me.

I looked at my snazzy ass sailing watch, noticed that I was "on" in 5 minutes and asked my Dad if he wanted me to get him a soda while I went below to grab one for my watch (notice that we're still on my Dad's watch at this point, very very important concept to understand). I stand up, step toward the companionway and WHOA, HOLY CRAP, THERE'S A MONSTER SHIP RIGHT THERE!!!!

About a half-mile away, the freaking Queen Elizabeth II was rumbling along at what must have been Mach 2. We scurried around, me gaining a death grip on the wheel (in case the autohelm decided to implode at that moment), my Dad running to the VHF, and the other two crew running up to see what the commotion was.

When we raised her on the radio, the communications officer on watch plainly stated, "we've had you on visual but never got you on radar, we just figured you were a singlehander sleeping when we couldn't raise you". At that moment, eight pissed off eyes glared at the useless radar reflector dangling in the rigging. A few more comments to the ship and we signed off.

I was now on watch, clicked on the stopwatch function and timed her 12 minutes to disappear on the horizon. We had been on parallel courses and it only takes 12 minutes of not paying attention and we could have been run down. For the next couple of nights, I actually stayed awake on watch.

Even though the QE2 technically didn't wrong us in any way, I felt it was somehow justified when she ran aground outside Cape Cod a couple of months later. Reliving this experience just didn't seem necessary this past weekend. And I certainly didn't want to cause this ship to run aground after all the money San Francisco has spent to dredge the Bay for the cruise ship industry.

12 minutes. Eek. A friend of mine has been known to single-hand to the Caribbean. He stays in the cockpit with an egg-timer set to ping every 20 minutes. He figures that big ships like the QE2 take 20 minutes to reach him from the horizon so he can fall asleep and wake up in 20 mins and still be OK. I will have him re-adjust his clock

Don't forget parallel courses so you have to factor in that I was on a Tayana 37, known for its sheer speed. We must have been going 4 knots.

It is bloody freaky how fast those things can come up on you.I hear that 10 min. watches are a good thing!

Excellent tie in to the QM2. Great story and lesson. I was on the lemmings who went out to see her. Unfortunately my camera was not happy so I don't have any photos as she barreled into the bay.

check my queens post here
http://tugster.wordpress.com/2006/12/07/queens/. i went to work early a few years back when QM2 made its first entry into NY harbor, 13 feet clearance. how close was she to the underside of GG Bridge?

Tugster, she had 30 feet clearance. We've had some fun entries with cranes that have had less than 3 feet clearance at extreme low tides coming under the Bay Bridge.

I'll check out your story.

All I know is that's one big-*ss boat.

And a strange way to "see" the world. I mean, you're not helping sail the boat and you're not really visiting other places (a 24-hour stopover doesn't count in my book). So what are you doing?

EVK4, your logo looks like a strawberry or watermellon. I was confused by the polka dot thing until I rememberd C's naming of your boat.

Tim, I believe they have extravagant buffets, shuffleboard and skeet shooting on luxury cruise liners. What more are you looking for?

The watermelon spinnaker is very cool isn't it? On those slow days we'll have seed-spitting contests.

I went to see her when she first arrived in NYC -

I watched from shore, though!

Actually it was pretty cool - it was a hazy day, and your first inkling that something very, very, VERY large was headed up North River (local name for the Hudson along Manhattan, 'cause that's the river you take to go north) was this DEEP DEEP horn - one of those ones where you're feeling it as much as hearing it.

Wouldn't want to get run down by either one, though! Scary story. Nice they saw you at least...

Great story thanks for sharing--