First Race of the Season COMPLETED

We actually completed a race on Saturday. No idea where we finished yet but I know it wasn't last place. Our start was mixed with spinnaker and non-spinnaker, PHRF 123 to 198. We were the 198. So we expected to be the last over the finish line, but the good news was that we were only 10 seconds behind a boat rated 150, so we beat them. I have no idea how many more we may have corrected over but hope to find out soon.

The most important part was the sailing itself. This was the Sadie Hawkins race so I wasn't allowed to touch the tiller, a huge test of self-control for me. Kathy has been my best and most reliable crewmember from the start so I thought it was a nice change to give her a race as Cap'n and she did great. The wind was from the South and the estuary runs East/West so we didn't really have the traditional windward/leeward course. This was nice as Kathy had never rounded a mark before our 20 minutes of practice pre-start so the easier point of sail made for more time to figure out what to do.

The start was confusing as all divisions had different courses and they were never really clear what the start times were, something about rolling starts. I figured out afterwards that meant if Div A starts 20 seconds late, so does Div B...or at least I think that's what it meant. Kathy got a good taste of my aversion for start lines as she said immediately post-start, "there are a lot of boats really close together here". I don't think any amount of "we have ROW over this guy and this guy, just steer clear of him" helps that concern.

Either way, we weren't DFL. Success is ours!

I also broke in two more crewmembers: Laura and Rick. Laura is an experienced sailor, Rick has never set foot on a boat that didn't have Princess Cruise Lines in its name. That's why he got the important job of ballast. But in fairness, he picked up scurrying pretty well. 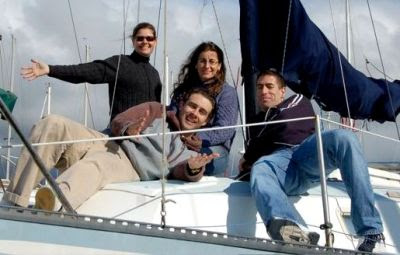 I'll write more about the race itself once I know the results (posted soon).

CONGRATS ON THE RACE! Having a good time is what it's all about. Giving up the tiller was also a good move...

bonnie said...
This comment has been removed by the author.
8:16 AM

You, Tillerman, nice to see the racing season getting underway! Yay!

Now the ballast thing reminds me of a race I was in once on the schooner I've crewed on for the last few years.

It was my first year & I was only on board as server, the first & second mates were experienced racers & my orders were "Don't touch anything, just serve drinks".

Until the downwind leg when they decided that the passengers had had enough to drink & it was time for me to be a boom vang.

Don't recall whether that was before or after they sent me to look for the key to the chain locker.