My last post was absolutely true when I wrote it. I signed on to the computer one last time before leaving the house to doublecheck the forecast and to see if SA had any more insight into the direction to go. I looked out the window and clear skies.

My father-in-law and I hopped in the car, and presto, not only fog but rain. The rationalizing starts, "rain isn't a big deal that means wind"..."there's only fog because we're in the hills"..."this stuff is never at the water level in the winter". And it continued once we got to the boat, "look, we can see the end of the pier, that's almost a mile, let's go".

Then we go out there and this is what we see: 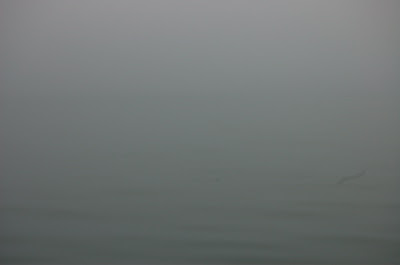 There's nothing wrong with your computer, that's fog. Lots of thick, wind-suppressing opaque fog. And cold.

So, here's the dilemma, I want to race. Badly. I'd spent weeks preparing; I was excited; I had A WHOLE DAY PLANNED. Everything in my heart said, go, go race. But every instinct (parental, nautical, self-preserving) said, "umm, idiot, do you really think you should go out into a major shipping channel with no radar when you can't see more than 50 feet in front of you?"

So, we had coffee: 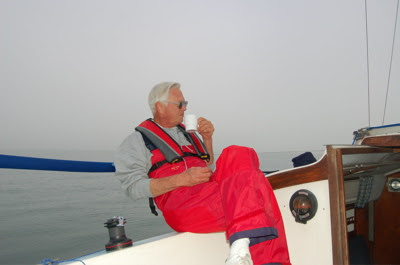 Then we pretended to sail for a while. Bob said, "any projects to do?" And, since there were we headed back into the marina, got the Easy Off Oven Cleaner out of the dockbox and erased the old name. The boat now has a bare transom, with the henceforth name not to be mentioned scrubbed clean off.

Every 15 minutes or so, I'd say, "hey, it's lifting, let's go" and Bob would say, "point to the end of the dock without using a compass." I'd relent when it became apparent I couldn't see the end of the dock. But, like all good things, it eventually did lift. And we sailed. 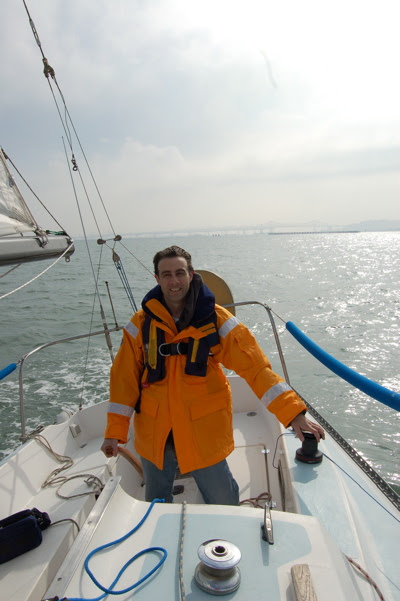 We went just short of Alcatraz before the Angel Island lee (wind was from the North against all predictions) stopped us cold. We turned around and sailed back in. What a freaking wonderful sail. We saw scores of boats doing the Fiasco, none of which could possibly finish before dark. But good on them for getting to the starting line somehow and braving through 2 hours of total calm and fog.

Despite not doing a race I've been doing backflips over, I know I made the right choice for me, and I did have a hell of a fun sail. And the boat name has been scrubbed off. And I did get to do a nice long sail. And I got to use the manual focus on my camera to get that picture of fog. Not quite a fiasco, but a good day nonetheless.

Like they say, a bad day sailing is better than a good day at work!

And I can say that with authority because I had to work yesterday. (sigh)

At least you're getting some sailing in... Where I am it was about -10˚ F with wind chill factored in... and no sailing.. UGH. http://blog.dankim.com

Being it is all about sailing, you were a winner. Adapting to a changing environment, being one with the moment, sailing safely when it was time. You rock!

Sorry to hear that the race was a bust Edward. I was really looking forward to your report on how it went.

I was there, albeit I saw the fog at sunrise and went back to bed and did not awaken until Edward and Bob returned. Good on ya Edward, although you made me feel like a slouch. Glad to hear the Oven-Off worked!
-The next slip-neighbor

Now, you did get the baking-soda version of the Easy-Off, right?

Yeah, that weather ... I think this year it's just not going to do anything it's supposed to. This weekend, we got, of all things, an ice storm in the desert.