A couple of things don't happen in life:


Well, #3 is a bad example (thanks voters) but the real news is the last one happened! 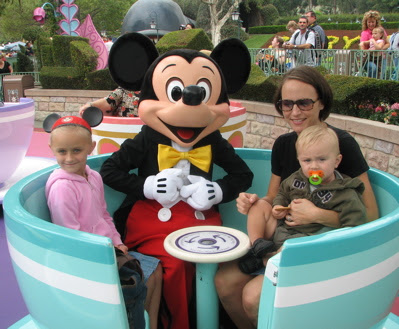 Of course, I was off riding Indiana Jones with fellow Polka Dot Racer Kathy and missed the event but we do have photographic proof. Apparently, they held up the line so that a few VIPs could skip to the front, after a few groans from the assembled masses, in walks Pluto, Goofy, and Mickey the Mouse! They each get in a cup and there's a mad dash for Pluto and Goofy. Heidi is a little back in the line and expects Mickey to be taken but when she sees the open cup, she gets all Franco Harris, stiff arms a few Midwesterners and secures the best seat in the house.

Camille's impressions of Mickey: he's nice, very helpful and strong for a mouse. Apparently, he instructed her on the proper way to spin the teacup and once he got into the spinning action sent them flying!

This doesn't just happen, what a one in a million opportunity for her to ride with the world famous Mickey the Mouse. She must have done something right in a former life.

A karmic moment for real. Something to tell her grandkids with photographic proof!

Of course, you know that Mickey had rigged all of this, and just waited for you to leave, so that he could get a picture without you in it. :D