Some "racing teams" define success as finishing a race (Polka Dot Racing 1.0), some expect to win (a lot of other teams), and some wish to keep out of DFL (Polka Dot Racing 2.0). And, on that note, we're succeeding, pulling out a 10th out of 12 in today's chowder race.

Wind was close to Summer Levels, with sustained winds 15-19, and gusts to 22 knots. Having my 6 year old and mother-in-law on board, we went with a reefed main for the uphill slog. Shook it out immediately after the first mark and enjoyed the downwind and reaching legs on the way home.

I don't want to get all emotional here, but as a team we're getting better. Maybe not faster but we're not having those abysmal moves that went on last year. Who can forget the race when I had to keep heading into the wind to allow the jib trimmer to fix his over-rides. Not me. But I'm not, like, holding grudges or anything. I let that go a long time ago.

This crew (pause for a picture): 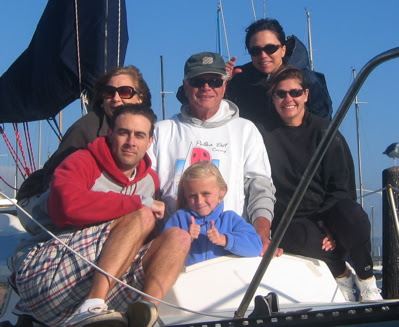 this crew is efficient. We're all learning our roles...best part: Kathy yelling out "watch your course" as I started fiddling with my watch. I really thought that 100 yards before the breakwater was a good time to adjust for daylight savings time, my crew slapped some sense into me. But, seriously, not one time did we bump into each other during a tack, we only had one line get caught up and that wasn't from anyone stepping on or sitting on it. From an aerial view, it might have looked like pure chaos, but from sea-level it was like a ballet...a rolling bouncing crashing through waves ballet.

About halfway up the weather leg, Bob started asking how much self-tailing winches are. I think we're all dreading that day when we rotate positions and have to take up jib trim. Of course by then, Kathy will be able to lift any of us over her head she'll be so strong.

congrats ed. :) What task does each of the crew handle or do you rotate tasks?

Great job. Better than my Sunday.

we all have specific jobs (helm, main trim, jib trim, foredeck). Foredeck is lonely right now since I don't have a spinnaker and we haven't had a DDW course for wing on wing.

We're going to rotate at some point but we've done two races so far, I'd like to get each of us proficient at our primary jobs.

You sailed a good race. But to keep you honest...you actually were 7th out of 9 overall. But this is PHRF my man. You finished 9 out of 9 with correction. Unless I missed the rest of the Newport Class. Remember the Etchells? And how could you already forget the C22?
I was hoping we'd see you for the Mid-Winters. We have a C22 Class, maybe up to 7.

Greg, I looked up your blog today to see if that was you. You should email me next time you come down.

The results weren't posted when we left the marina so I conveniently ignored the corrected times. Seriously, we just don't want to be last into the marina right now. Last year on the C22 we couldn't even finish a bunch of races in the Berkeley winds. I swear we were going backwards one race in 30 knot winds.

I swear I counted 12 boats at the start though.

Edward,
It was us, indeed. We came down Saturday, went for an evening sail..stayed on the boat and had a great time racing yesterday. Could'nt bust out my new (used) mylar 150 though. We were rounding up with the 110.
Will be back down on the 11th, spending the night at M-298 again and racing the Mid-Winters on Sunday.
Your new ride looks nice. I enjoy checking your blog.