Now sit right back and read this post,
a post about a famous ship
That's being sold in Canada
you can buy it from its slip

That's right people, the SS Minnow is for sale.

It turns out there's a lot I didn't know about the SS Minnow. There were 4 of them on the show, this one was the 3rd and the only one that was a real boat (not an elaborate set). This means that all of the cast was on the boat at one point. That's right, both Ginger AND Mary Ann were on this boat. Now, come on, that's worth $99K right there.

The boat did sink in 1992 but not from two huge gaping holes on the starboard side: 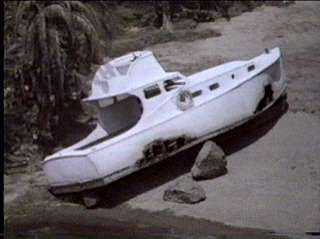 Now that I look at that picture more closely...how exactly did the boat make it to shore? Those rocks on the beach couldn't have caused both holes so they were in place out on the open ocean somewhere. If you can't believe a Sherwood Schwartz sitcom, what can you believe?

The boat could have been tossed up on the beach by storm surge... nothing in the photo says the holes were tha size when the boat hit the beach... :D

Both Ginger AND MaryAnn, no choosing, !! count me in I'm there...