I could show a few more photos of how green the boat is after the third coat but you'd just be envious. I had this idea that I wouldn't actually put the name of the boat on the transom, just paint a clover on there. I called Camille out to discuss this idea and she informed me that she'd always envisioned a clover on the topsides port and starboard with the name painted on the transom. Of course, that's a much better idea so I went with it. 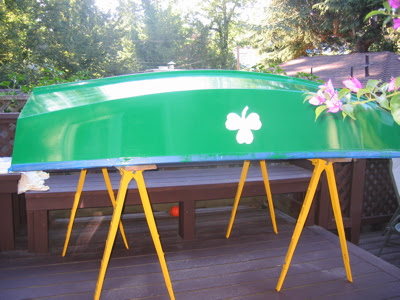 Unfortunately, this is obviously a hand-painted clover but that's OK, this boat is so fast it's going to look like a blur anyway. After cutting out the stencil to trace the outline, Camille shook her head in disgust that I put the clover on upside down. Score one for me, I yelled, the boat is upside down too!!! Haha, I said, I have outsmarted you. Haha, in your face. After reveling in my glory for a few minutes, we got to painting and that's the port side with another coat or two needed.

Has anyone noticed that the bougainvillea somehow sneaks its way into every picture of Clover? It's like the Where's Waldo of the plant world.

I'm green with envy. Three coats of green envy. I'm going out to paint a clover on my Laser right now. Four leaf clover for luck of course. The way I sail I need it.

The captain is wise beyond her years in her wisdom...my only question is why she still takes you on as crew... ;)

Isn't the name on the boat a requirement for state registration?