Sunday was one of those days that makes you wonder how people can live anywhere else. Low seventies, flat water, comfortable breeze, beautiful scenery, and a blessing from the Coast Guard.

Even though we got an early start, we had a tight schedule to keep (soccer game for Camille, baseball game for Jack) so we motorsailed out to Angel Island. I kept trying to convince myself the main was helping but I think it was more my wallet reminding me that I was paying $3+ per gallon for that gas. Still, it was relaxing, we enjoyed a coffee cake and fresh fruit in a nice even-keeled boat.

The fun started when we got to Raccoon Strait. Funnels are good for a lot of things...engine oil, sugar, cakes; they're dangerous when it's a lot of boats coming from all compass points trying to get in a line. The stinkpotters don't quite get how sailboats work, the sailors don't quite get why someone would be on a motor boat. It all boils down to one sight that would make anyone uncomfortable: 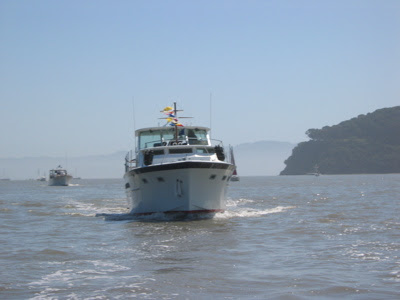 This next photo will get its own post someday, but I think it shows my general anxiety around the happenings in this lineup: 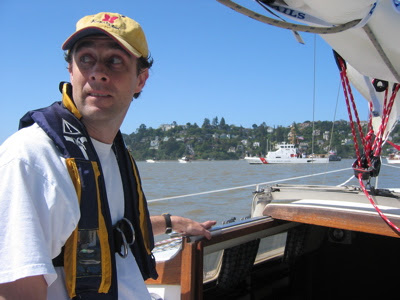 I really wasn't too concerned about him but I knew that I was only a few minutes from being blessed and I couldn't help but feel that if anything was going to happen it was while my previous year's blessing was ticking down the minutes and wearing thin.

Luckily, we made it to the USCG Cutter Tern safely. They must have read my previous posting because this year a civilian was up there chanting and the priest was just waving and smiling. There was enough officialdom on that boat to satisfy anybody's blessing needs; I have a feeling this is going to be one of the better ones: 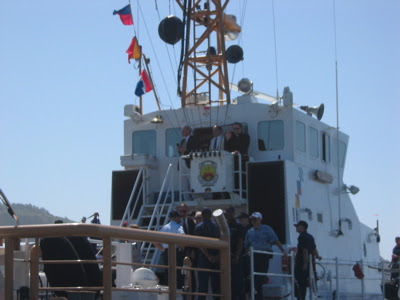 I have to thank the Coast Guard for doing this, there is something very comforting knowing they're out there for us. If you see this boat out on the bay, feel free to raise your glass to them: 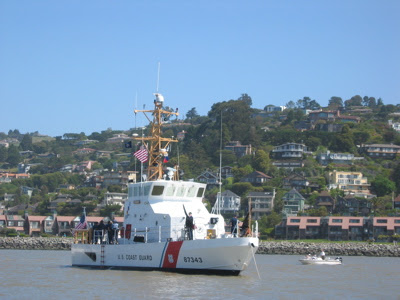 Of course, don't blame me if they board you for waving a beer at them.

After the ceremony, we raised sail, reached back down the strait on the mistaken belief that a straight line is the fastest way to get where you're going. Of course, only minutes before we had been in the lee of Angel Island but were motoring so we didn't really notice. Well, we sailed right back into that lee and had to fire up the engine to get out of it in time for our sporting events. Not too wise, but I had a fresh blessing and was pretty sure the wind would come back and it did.

Pretty soon, we had 10-12 knots DDW, we fired her up wing and wing and sailed right back into the marina glowing like newly blessed sailors. And I didn't even mention the new sails!!!

"Blessed are the cheesemakers!"

I was looking for a good quote about blessing and that was the first one Google found. Apparently it's from Monty Python. I guess you had to be there.

Ah, yes, it's from Life of Brian ... You know, the Monty Python version of the Sermon on the Mount would look interesting on church signs ...