We Have a Name

Camille decided on the Newport 28's name, varying a little from her usual approach. Ponies weren't really doing it for her so she went elsewhere for inspiration, somewhere unexpected. And scary.

She chose Rampaging Warrior, Defender of the Bay against all expectations. The Vegas bookmakers were shocked and must have lost a lot of money on this one. I'm just hoping it will fit on the transom. 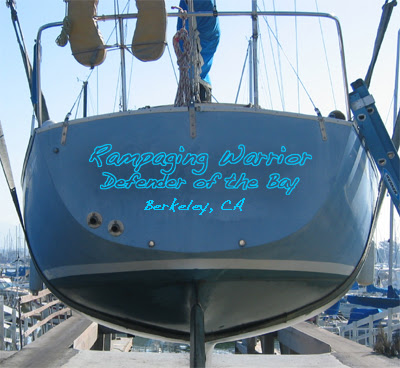 Rolls off the tongue, doesn't it?

But, alas, the North Bay EVK4 Bloglet Fan Club only wishes this name were true. They're going to have to sail on a boat with a decidedly 5-year-old-girl-inspired name. But I can't tell anyone what it is yet. I have yet to perform the de-naming and naming ceremonies as described by the infamous John Vigor.

In the meantime, suggestions for the best way to remove paint off of gelcoat would be appreciated in the comments section.

I guess you can still refer to your little pony as "Rampaging Warrior" in your posts. :D

Five-year-old trumps daddy everytime... that's a lesson many of my friends are painfully learning, or in some cases, re-learning.

Can't wait for the "Fluffy Numkins" to set sail.

P.S., only for CK will I accept a name based on a pony.

Adrift,
Don't worry, the boat will not be named Fluffy Numkins. It's Fluffy Nunkins II, named after the yawl her grandfather had when I was born. As I'm the 4th, our family's boats like to keep traditions alive as well.