More boating dollars going through the scuppers this week. During one of my many clean-the-boat-up days last week, I stepped on the main halyard and noticed that the cover ripped right off. It's like it evaporated into dust. That's bad. Since I knew I was going to be replacing the sheets anyway, why not go all out and replace the halyards, backstay, and reefing line too.

During these spending sprees, it has become more and more apparent that unless I need the part right now, stay the heck way from Worst Marine. Even factoring in shipping, my running rigging order saved me 45% going through Mauri Pro Sailing; in fact, when I compared, I could have saved a few dollars on those Harken blocks I bought last week from Annapolis Performance Sailing. Live and learn.

So, here's what I did for my lines: 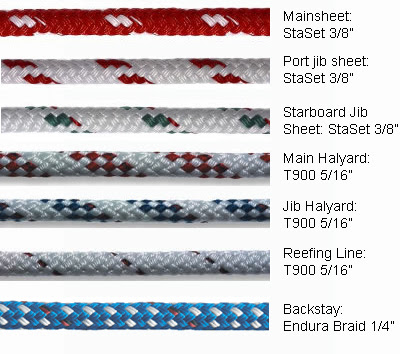 Notice that I color coded my starboard and port jib sheets. That really amuses me for some reason. Years ago, my brother, a merchant marine, was complaining about the quality of able-bodied seamen on board, he decided that all newbies were to have their boots color coded so they could see the difference between port and starboard more easily. Around that time, we went to play paintball up by Mare Island...we ran up against some pro paintballers (probably lived in their parents' basements too) who tore us up. At the end of the day we noticed that his work boots had been tagged with direct hits (red on his left boot, green on his right boot). He had to go to sea like that, couldn't get it off.

Of course, I don't allow boots on my boat anyway, so I had to do something to help my crew out.

Mauri Pro Sailing has some really good prices. Defender is also quite good. I don't think that your crew will notice the color coding unless you point it out specifically. Sailing season is fast approaching... let's all get ready... Some of us don't have the luxury of living as far south as others.

A very long time ago I lived in New Jersey, and the place you call "Worst Marine" was a one-store mail order chandler out in California. Try as I might, I could not find lower prices than theirs for such varied items as compass, anchor and rode, fenders,
docking lines, sheets, and a RDF, which was the high-tech nav instrument of the 1950's. How times change!

Adrift, you can bet your bottom dollar they'll notice. One of my idiosyncrasies is that after every race, I quiz my crew. First, they draw straws to see who's "it", then I blindfold that person and spin them around in the cockpit once for every boat that finished in front of us.

That person is then set free to perform a difficult manouver (for example a gybe-set) while blindfolded, being pelted with objects from the rest of the crew, and answering my pop-quiz. Examples of the questions:
1. what color is the port jib sheet?
2. in 25 words or less, why is Bluebeard more of a bad-ass than Blackbeard?
3. who's in charge of the boomvang uphill?

They put up with this because they know they can't get back to land without me. And it makes them better sailors.

Anonymous, don't get me wrong, I still go to WM but only for immediate needs. But there is something satisfying about going in and looking and handling the block that I'm going to buy elsewhere.

I think they realize that powerboaters are a better market because very few of these guys actually know what sailboat bits are.

With your sextant skills, I can't imagine you ever needed an RDF...someday I'll write about our approach to Bermuda after 3 days of cloudy skies and your incredible accuracy on when I'd first see that lighthouse. Incredible.

Holy cow-after 12 months I can finally participate in one of these conversations.

Blackbeard was way more of a badass than Bluebeard. Bluebeard killed his wives-not too manly. Blackbeard, on the other hand, stuck lit candles in his beard prior to battling other swarthy pirates.