Not for me this time. Some of you may remember, the fiasco that was my first day with brand spanking new sails. But I knew that lightning wouldn't strike twice.

Bob and I had just started to rig Polka Dot for what promised to be a perfect day sailing (10-15 from the north, meaning a beam reach out of the marina) when Ann (port side neighbor) bounces up to the dock beaming about her new sails being on the way. She didn't have anyone to sail with, so she asked us to go for her new sails' inaugural sail. Hell yeah, we said,

Ann has been restoring her 1938 Bear Boat since I arrived at the marina a year and a half ago. She's finally ready to sail with a new coach roof, new deck, finished bottom, and finally new sails. I was excited to take out this classic. The picture below is of hull #8, Ann has hull #9. 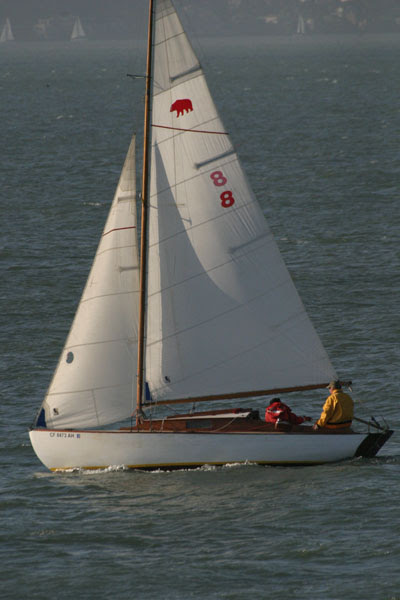 I started to sense danger when Bob had to head over there to help rig the sail. The sailmaker was busy trying to cram the clew into the gooseneck fitting. Bob helped get that sorted out, but the clew grommet didn't fit into the ancient bronze outhaul gizmo either. The sailmaker suggested some lame idea about a couple of shackles linked together and then fled like a weasel. By then Tenacious B had a project and he wasn't going to let go. It was foregone, we weren't sailing.

Three hours later, complete with files, razor blades, drills, and burrs, that sail wasn't on there yet. My suggestion of two blocks, a turning block, a nice cleat, and some line for maybe, I don't know, a modern outhaul was ignored. When we finally had to go, it was obvious that 2005 components will not play nice with 1938 components but that some 2005 machinery might reshape things if they were brought to a machinists shop.