But that's a story for after the picture because what we ended up doing amounted to an excellent shakedown sail. Behold the glory of the Polka Dot Racing Crew: 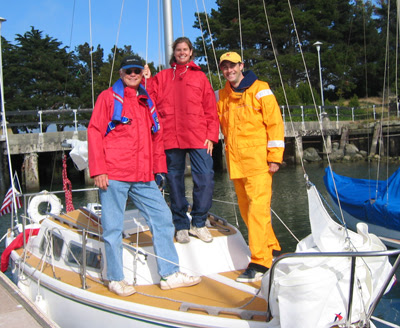 Now, behold the glory of KG holding the broken shroud: 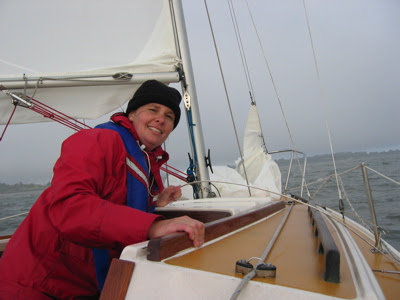 We went out an hour before the race, practiced crew movement (this was our first time all sailing together), convinced KG that movable ballast is an excellent career choice, had plenty of fun and got really wet. About 15 minutes before the start, the wind reached that magical place where the boat is actually faster with a reef in the main. I thought we had time to reef it behind the breakwater for safety reasons. Wrong.

We got the reef in and about a minute behind the starting line, the gun went off. Luckily we were flying up to the line and I just pretended that we planned it that way. We crossed the line, were very surprised that it was course 21 (there was going to be reaching, interesting), and took off in hot pursuit of our division (Islander 29, Cal 20, and Santana 22). The 2 small boats were far to windward, and the Islander was about a minute ahead of us but we were closing the gap a bit. The GPS later told us we were in the 5-6 knots of boatspeed range on this beat to windward. Not bad.

The decision was made to tack when the Islander did and try to gain a bit more before the reaching leg. If we could stay a minute behind, we'd beat him on handicap. So we tack (about 3/4 of the leg completed with one more tack to get on the layline) and KG looks back and says, "is this supposed to be here?". It looked like she was holding the lifeline...interesting since the lifelines were still taut. So, next instinct is to look up and sure enough the aft lower shroud was down. Not good considering we had the 110 up, but good thing the main was reefed.

We dropped the jib, turned around to head back in on a nice broad reach with the vang blown to decrease load on the mast. Uh-oh, here comes division 2, all those hot little sports boats oozing testoserone and hiking crew. Being on starboard I had ROW, but I didn't want to screw up anyone's race so we zigged, zagged, and wound our way through about 8 boats without any of them having to change course. Of course, the railbirds were bored upwind and were casting very curious looks our way. I gave that timid half-smile, half-wave that tried to convey, "crap our shroud broke and we have to head in".

Of course, we're badasses so we sailed into the slip despite the fractured rigging. Sent me up the mast as soon as the sails were stowed and apparently one of the D shackles holding the shroud had exploded. The guy who owned the boat before me wasn't a big fan of stainless steel so I'm sure that's the culprit. More money to West Marine.

On to the good news...our boat speed was excellent. We kept up with the bigger boats in our class. The adrenaline was incredible, it was like an extra gear kicked in once we passed the starting line. Interesting that everything is just slightly amplified while racing; things that you do slowly and methodically while sailing are intense and fast while racing. My guess is that if we can slow down, things will go more smoothly. But KG, BB, and I really were clicking there before the "incident".

Regarding the "incident": despite the intensity of this being a race, this was nothing Polka Dot hasn't gone through a hundred times. 20 knots of wind, beating out into the bay. A bit rougher waves than usual, but I was steering over them to keep boat speed up so we weren't pounding into them. It was just a highly coincidental, unfortunate time for it to happen. And it's already repaired and I've checked up on the other shrouds and all is well.

All told, excellent first race and maybe next time we'll make it to the first mark!

Bummer. Sounds like you had a great time though. May I suggest that you're more likely to get my wife back out there if you stop referring to her as "movable ballast"? Just a thought.

Kathy said she had a blast. I'll get out there sooner than later.

that's only UPWIND. The rest of the time she's called foredeck, bow-goddess, Queen of the Pointy End (that doesn't sound good does it?). For gosh sake, she's now officially allowed to join the bowman's union and develop an attitude problem. It's an honor to do foredeck.

i have no flipping idea what the heck you are talking about, seria mejor que lo escribieras en castellano por que no te entendi ni papas... congrats anyway...

I agree with "anonymous" that I have freaken idea what you are talking about...I did notice that you are in all yellow, isn't boating kinda like biking and only the winner suppose to wear yellow?

The ladies dig yellow...it shows my sensitive side. Oh, and I think yellow shows up in the water better if my beleaguered crew gets tired of the yelling and throws me in.

Awesome. I can't wait to hear about the next race.

Wow - what happened? I thought you were a confirmed cruiser. You write about racing as if you might actually be enjoying it. Next thing I expect to hear you have bought a Laser.