You wouldn't know it from my recent posts about everything but sailing, but I still sail. I went out with my niece, MA, last week and had a fine time. 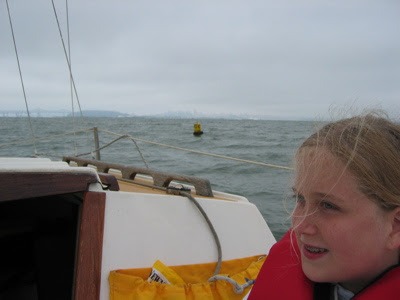 As you can see from the photo above, the weather didn't cooperate. We went out pretty early to beat the Crazy Summer Winds (CSW) and had a foggy overcast day. We sailed for about 2 hours, zig-zagging around the Olympic Circle trying to keep up with an Olson 25 and following his wind shifts. It was nice, we had about 15 knots most of the time with occasional Bizarre Wind Shifts (BWS).

The crazy part wasn't the sailing, it was when we got back in. We sailed into the slip (yes, you read that right, I'm a badass and can sail into my slip), flaked the sails, covered them and sat down for some sandwich time. As soon as the sails were put away, the freaking Sun came out. Not peaked out, but burst out like the first clown out of a stuffed volkswagen.

As soon as the Sun was out, the winds started picking up and the red flag flying over the marina office made sense. We made it back in right before the CSW really got crazy. It's like Mother Nature waited until she saw some yellow sail covers, let down her guard, and said, "let's blow!".

B, thanks for those organic pretzel bits. You can see the corner of the bag in the sheet bag in the picture. Not only did they taste good, but they served as an excellent speedometer.

I also brought on board some "Pirate Balls" (corn puffs). Imagine my disappointment when on closer examination they turned out to be "Pirate Cannon Balls".