Rules of the Road

I always worry about right of way. Not necessarily who has it, but who knows who has it. That guy barreling around with two 225HP Mercury's on the back of his sled -- do you think he's read the rules of the road, does the 12-pack of longneck bud in his cooler keep him from recognizing sails and my subsequent superiority in the right of way ranking? I just never trust these people...even other sailboats. When possible, I just stay away from everybody. 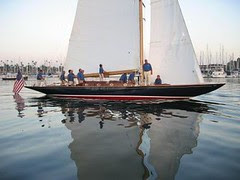 There's a guy down in San Diego that probably knows the rules of the road pretty well, Dennis Conner. He just spent millions of dollars on restoring Cotton Blossom II. Then while out racing last weekend, a frickin' sailboat motoring along happily hits him.

My favorite part is the quote from Bill Trenkle, Conner's longtime aide (whatever that means): "We're not sure what (the other skipper) was thinking. We don't know if he was tired, or on a cell phone, or what. We waited for him to alter course. When it was clear that he was not altering course, we took evasive action."

That's the rub, you can't wait for this yokel to alter course because you can't trust him to know that he has to. A few weeks ago, I was on a starboard tack and a 35 foot or so Hunter was also on starboard tack to windward and bearing down on me in fairly light winds. Our courses were only slightly different, but enough that I had to keep bearing off as he pushed me aside. As I was giving him stink eye, he casually asked me if I had a swing or fixed keel. Like I hadn't just had to alter course to avoid getting hit. I responded, "what's that, I couldn't hear you, I'm reviewing the rules of the road."