This picture really says it all. 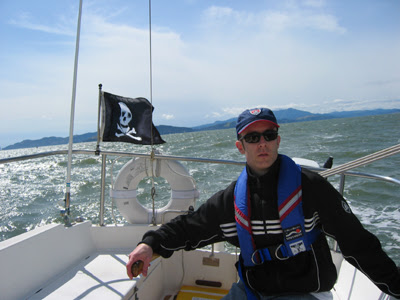 I've gotten used to winter sailing. Gentle breezes, lots of layers to keep warm. Yesterday was my first day out with the famed San Francisco Bay Sea Breeze in months. You could tell it's been a while by the amount of stuff that was on the cabin floor when we got back...binoculars, crayons, hacksaws, lifejackets. I hadn't had to properly stow anything in 5-6 months apparently.

We motored out of the marina into some big chop that I wasn't expecting. The Catalina 27 that went out right in front of us did a U-turn and headed back in; I offered Tim my foul weather gear. Within seconds of raising sails, we were on our ear and sailing to Angel Island. I didn't have fresh batteries in the GPS or I'd be bragging right now how fast we were flying into the wind, but I'll make something up. Umm, 5 knots. Maybe 6.

With noplace really to go, we just criss-crossed around the Olympic Circle race course, checking out C, X then heading over to the end of the Berkeley Pier then out to that buoy where I saw the sea lion the one time. By this time we had to head home and I think Tim was really over having to hike so we turned downwind and ran home. As is my new custom, I sailed into the slip but had to use some reverse on the outboard to slow us down. We were coming in very hot.

When I got home, I checked OCSC's club cam and wind gauge to see how hard it blew that day. We topped off at about 25 knots, probably about when we were out there finishing our windward leg.

I put a reef in the main before I left figuring it's easier to shake it out next time than have to reef once we're out there. I'm hoping for 20-30 knot afternoons from now until October.

You can say that again:

(What you can't tell from that picture is that I'm utterly terrified and wondering if I'll hit the oncoming yacht...)

hey, i don't like the new "drawn" picture of you. it doesn't look like you. i thought it was tim. who knew you and time could look so similar...maybe that's what you were going for?

Thanks for bringing this dirty little secret out in public. Edward has long sought the "Tim look". It's quite disturbing to those of us in the inner circle of EVK4.

C'est vrai. If I could do the "Tim Look" I would. I just don't think I could afford the wardrobe.

oh, it's my husband again. evk4, i wouldn't advise against a little shopping trip with tim from time to time. his collection of bright and shiny shirts is impressive.

Hmmm. Tough to know where to go with this.

I'll accept the compliments on my wardrobe but will also specify that I almost always buy on sale...and not that often at that.

Edward doesn't want my look b/c he still has a nice head of hair. Besides, he's been rockin' that hip, urban, quasi-Beasties thing for years now.

BTW, who is "crkmama"? No user profile and no blog. What's up with that?

tim, we like guys who shop. don't down play it. shop with pride for those of us who can't right now.

Hence why the only way to control the outflow of cash is to avoid the stores entirely.

I work in the Spin Factory but damn if a good retail experience doesn't just suck me in.