Separation of Church and State

OK, it's opening day on the bay, right? Should be a day to think about nothing more than, "am I going to run into that tanker if I stay on this course" or "why is there water in the cockpit, isn't it supposed to drain somewhere?". But I got dragged into a much darker, deeper train of thought as I rounded Angel Island. I had pulled into the line of boats heading SW up Racoon Strait to be blessed. The problem is, I didn't know much about this ceremony.

It's sponsored by the Corinthian Yacht Club so I expected some big fancy yacht to have some over the top rich guy in a cableknit sweater splashing us with a hose from his transom in an odd but potentially life-saving blessing ritual. Pulling out the glasses, I looked ahead but couldn't see anything resembling this big fancy yacht or an over the top rich guy. I just followed the line of boats. At one point, some guy pulled up next to a Coast Guard Cutter, and I thought, "now he's done it, that guy's getting pulled over for not wearing life vests, ha ha ha."

We get closer and it becomes apparent that the blessing is from the Coast Guard Cutter. Not so bad, better than getting a ticket. Finally, our turn and I come tearing alongside the Cutter at 2.4 Knots, quickly dropping the Jolly Rogers and putting up the Ensign. Suddenly, over the loudspeaker I hear, "Holy Holy Holy, Blessed be the Yachts on the Bay, blah blah God blah blah Lord blah blah may the Captain and Crew be safe blah blah blah amen."

I coughed up a hairball.

A Captain on the USCG Cutter Tern had blessed me not with some outlandish nautical chant but with some God something. I'm all for God, I like God, I believe in God. I just didn't expect any God chants coming from a Coast Guard boat my tax money had paid for. Now, I know this doesn't necessarily violate the 1st Amendment but it does break the spirit of separation of church and state.

Luckily we had a 15 knot Southwesterly to get my mind off this travesty and by the time I docked in the Marina of The People's Republic of Berkeley I was over it. But by then my blog had already written itself. 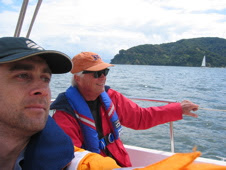 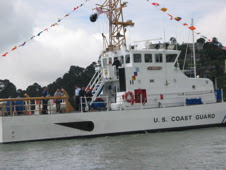 hey, you are such a hot sailor babe. are you single?

Dude-I was so not the "anonymous" that posted that.

It sounds as though we had a great time, which we did. Thanks again.

The left (and its ACLU lapdog) is SO wrong on the issue of church and state. Nowhere does our constitution prohibit blessings from Coast Guard cutters, nor ten commandmants plaques in court houses nor creches in public parks. It merely prohibits congress from establishing an official state religion, such as the Church of England in the UK.
As they say every time a USN ship is launched (no - worse - Christened) "God bless this ship and all who sail in her."

I have an update. I zoomed in on the bridge of the Tern and can see a priest standing next to the Captain. Red said Ned, any feelings on The First Estate being allowed on deck?

How can you say you beleive in God, even like God, etc., and then complain and be upset when His name is mentioned?