Deceiver Exarch For the Twin! 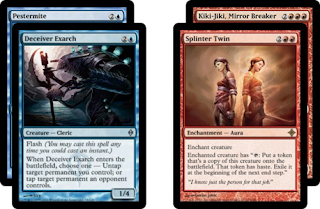 Since Noah has turned into the King of Splinter Twin I've had a problem.  Patience.  I've either exercised too much patience or too little.  Here's the crux of the problem, he always has cards in hand and open mana.  ALWAYS.

So, what do I have to do?  I need to realize that he can combo off starting on turn 3 (for non-MTG'ers, combo off means play two cards and win) and keep any outs that I have in hand to stop the combo.  I also have to very carefully play around all of his removal and bounce effects.  And I have to put a clock on him (meaning do a certain amount of damage each turn).

But it never ever works.

Example.  I'm playing Tron and I think I have a lock on him by playing two spellskites.  These critters are nasty, they can redirect spells to themselves, keeping him from combo'ing and winning.  So, they sit out there looking mean and menacing.  Every time I try to get out a threat it's either countered or bounced back to my hand or something.  I finally get 12 mana and play a wurmcoil for 6, it gets remanded, so I tap the other 6 and it gets played.  I have a threat on the battlefield!  And he can't combo!  I tick up Karn one more and ready to exile Emrakul next turn, then ultimate him to restart the game with Emrakul on the battlefield after that.  It's a beautiful line!

Then Noah electrolyzes a point of damage to each of my spellskites and draws a card.  Uh oh, why would he do that?  Because he then bolts one of them, casts snapcaster mage, and bolts the other.  I shake my head and wonder aloud if I could have just redirected both points of electrolyze damage to one spellskite.  He casually shows me the other bolt in his hand.  Argh.

Next game, on the play I get out a turn 3 oblivion stone on the off chance that he doesn't have the combo.  He does.  Of course, he does.  Before I had enough mana to blow stuff up...combo!

We play no-sideboard because we both want to learn  how to play the matchups.  But none of our matchups are good.  Our other decks: Tron, Affinity, Burn and Bogles.  None of those can withstand the Splinter Twin juggernaut.  I'm going to sneak some rending volleys into the main board for Burn and Tron (we run main board Galvanic Blast in Affinity and Path to Exile in Bogles) just to kill the freakin' Deceiver Exarchs but it shouldn't be this hard.

It's weird that killing a 1/4 is such an important thing.  First time I played Burn against him, I held up 1 red and 1 white mana thinking I had him.  He Gitaxian Probed me because I looked too confident.  He looked at my hand and immediately cast Deceiver Exarch.  I laughed, threw down Boros Charm and said, "busted!"  He asked if I was targeting him or myself; confused, I read the card.  Target player!

We had worked out a pantomime of the combo where he pretends to tap both cards back and forth a few times so he did that and it was back in the loser's bracket for me.

I know we have answers in our decks (well, everything but Burn does) but without sideboarding I just can't get there.  It's an amazingly frustrating feeling that the two of us are playing really amazingly good games of Magic but he's just a step ahead of me always.

It's not a 100% matchup for Twin, I have to win some time.  But I need to find that patience/aggro line and when to do each first.