When Noah and I have enough packs (4), we play a fun format called Pack Wars.  Editorial note: I have highlighted that phrase to add some fun and excitement to the blog.  If you're using a 15 year old browser the blink tag might even be working!

Pack wars is simple.  We each get 15 lands -- 3 in each color.  We then open a single pack, remove the filler and land card from the back*, and shuffle it into the lands without looking.  The we play Magic: The Gathering as usual.

Except it's not usual because we don't know what cards we have!  The focus is alternately on beating the other player (you know like a freakin' spell casting wizard planeswalker would do) and drawing the card on top of your library hoping for that mythic rare sweetness.

Once the first game is decided, we repeat the process with a second pack and slip 15 new cards into the deck sight unseen and shuffle up again.  If you didn't see the rare in the first game, you now have two to pull off the top.  Double the pleasure I guess. 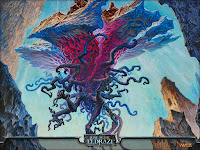 The first time we did this, it was with Modern Masters 2.  I delivered a beatdown with Ulamog's crusher or something, but everyone was disappointed with the stupid rares that we pulled.  We added the second packs, Noah beat me with some artifacts or spirits or something, we pulled more dumb rares and finished kind of disappointed.  The game itself was fun (I cast an eldrazi I guess) but Pack Wars needs a game and a pull to make it worthwhile.  All we got was a game.

As I was about to toss all the cards into a box for later filing, Noah asked what my second pack foil was.  Hmmm, I didn't remember so he grabbed the deck, rifled through it and flipped out.  A FOIL EMRAKUL!  A card that almost got unceremoniously tossed into an Adidas shoebox suddenly became the first card in our Tron deck!

Fast forward to two nights ago.  Played a pack war and got Ulamog.  Yeah, that's an Eldrazi.  Fun, mythic rare and we were happy.

Last night, we go again.  First pack, Noah is badgering me about whether I got my rare yet.  I had but wasn't going to tell him instead changing the subject to whether we could pretend this mountain on the battlefield was an island.  He kept saying no so I kept lying about the rare sitting in my hand.

On about turn 8, he flips out and yells, "Dark Confidant!".  As happy as I was for him, I'm in this thing to win.  So I tell him, "yeah, my rare is better than yours, but I'm not showing you until I have a second island."  He concedes that the red land on the battlefield looks pretty darned blue to him, I play my Vendilion Clique with aplomb and commence the beatdown while he has to figure out how to kill his own Dark Confidant (by this point he was taking 3 from the air every turn and hitting himself in the face with each Dark Confidant draw).  Vendilion Clique won the game.

So, yeah, I won the pack war coming and going.  But Noah got a Clique to go in our work-in-progress Twin deck!

tl/dr I pulled a foil Primeval Titan in the second pack.


* If opening Modern Masters 2, there is no land card, just the filler.  FYI.

In case it seems like I beat my 10 year old by cheating, rest assured that I just employed some editorial freedom to make it seem more exciting. After I showed him the clique, I actually drew my second island the next turn.