Through some absolute fluke of good timing and preparation, we were second in line to enter Disneyland last Tuesday. We had secured the spot over on the far right behind a couple of heavier ladies (yes, this is pertinent).

It took about 15 minutes until they opened the gates and the lady at the turnstile had already pre-scanned our tickets so at the appointed moment, we would all just walk through. The order: Noah, Camille, Heidi, and then me. After the heavier ladies of course, it's not like we're impolite.

When I get into Disneyland I like to savor the moment...we are at Disneyland! You know, like that. 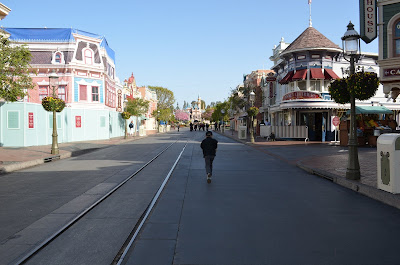 I was trailing behind, fumbling with my camera, yelling his name to stop and pose for a picture. He was the first one down Main Street! Photo Opp! {editor's note: those are cast members ahead of him in the shot} He ignored me; he had places to go.

He didn't stop until he was the first person on Star Tours. His explanation: this would never happen again, he didn't want to miss his chance!

Later, once we caught up to Heidi and Camille, they mentioned that they had stopped at the fruit vendor on Main Street (seen in the right of this very picture) and remarked that Noah was insane. The fruit-monger looked at them and said, "Noah? That's the kids name that ran down Main Street 5 minutes ago with his Dad yelling his name. He is insane!"