I'm at a bit of a loss as to what to write about for the Spinnaker Cup.  24 hours of ocean racing doesn't really condense into a blog post.  The Pac Cup is easy, each day is like a chapter and the world as you know it is evolving each day as you go through different climates and stages of fatigue.  Plus you catch fish.  On the Spinnaker Cup, you're basically sprinting down to a wind hole as fast as you can and then drifting for a while.

The most important aspect for me was that I've now sailed with everyone on the Pac Cup crew.  If I had to pick a watchmate at this point, I couldn't.  I'd be happy spending 4 hours on watch with any of them.  I'd even sail with the two guys on the boat who couldn't make the Pac Cup due to other commitments.  Now that I think about it, I guess I'd sail with just about anyone.  Except that Bertranbd guy, not sure how that would work given our acrimonious history.

So let's go with highlights from here.  The start was delayed by over an hour due to light wind and a raging flood.  Thanks to that flood, when the race finally started, it took us 15 minutes to get over the line.  Though Valis sails like a freight train at times, she is not a freight train that points into the wind very well.  I shudder to think what our start would have looked like if I'd been driving; I'm just glad that didn't happen. 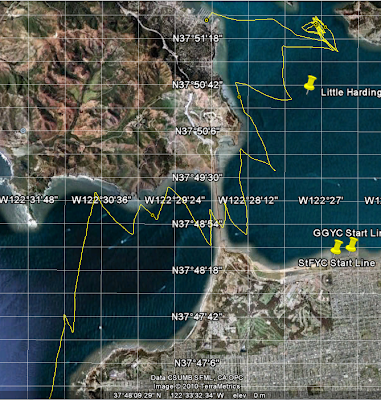 You can see from some the track that thanks to the flood, we were not exactly tacking through ninety degrees.  So we ended up behind a lot of boats that could outpoint us leaving the Gate.  Our main competition was a pilothouse attached to a boat that we battled most of the way down the coast.

When we finally were able to put up the kite magical things happened.  Valis was roaring along, keeping a steady 9 knots as the wind built from the NW.  I'm not sure what we were thinking but we kept the all purpose kite up as the wind kept building and before we knew it, it was getting dark, we were blasting along at 9+ knots and the wind had built to a steady 25 with gusts to 30.  By this point, we were just trying to keep the beast tamed enough to maintain an upright mast.

But, instead, we learned how to crash the boat quite well, succeeding in laying her over on her side three times.   I am honestly quite thankful for that; I had never been in a complete roundup before and I feel a lot better about how Valis handles it and what we need to do to bring her back upright.  What I didn't like about sitting in a cockpit filled with water is that your boots fill up if you haven't velcro'd your foulies properly.  I don't think my socks have dried yet, four days later.

We finally realized that putting the boom in the water every 15 minutes was a bad idea so we pulled the kite down and got back to sailing to Monterey.  Everyone but Jack and Keith went to sleep and they continued the effort to sail us to the finish line.  Don't know why we let them be in charge because they must have forgotten to put coins in the wind meter and it just shut down.  I woke up, saw land and asked how far we had to go.  They pointed about 2 miles away and explained that we were slowly drifting away from the finish and hadn't made headway in a couple of hours.

Since it's impossible to make the next five hours of drifting exciting, I'll leave you with the reason we sail on the ocean: 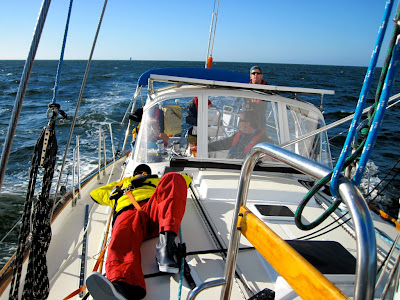 That spec on the horizon is GalaxSea, our closest companion the whole race.

I didn't have any change onboard, only bills. The wind meter wouldn't take bills, and I would have paid plenty of bills to get the wind cranking again.

Luckily the tradewinds take Paypal and credit cards. And I think they're a bit cheaper as long as you're out of the Pacific High Surcharge Zone.

I laid my boat over on its side today. My socks got wet too. Frickin awesome!

Sure hope you had a tether on...those lasers sound dangerous.

Did you know you can create short urls with AdFly and receive cash from every visit to your shortened links.