I'm doing it again.  Last time I was teased mercilessly for being a girlie-man, scared to drink coffee on the open ocean.  But that's the life of the blogger, exposing yourself to the public (in a legal way) for the betterment of all.

So, as of this month I've cut my coffee consumption down to 2 small cups a day -- one at the club and one at the office.  I figure it's easier to kick a habit if your addiction is to something that doesn't taste good.  Then, starting in March, just the club coffee, and then in April....kablooie, no more coffee.

I do have a good reason for this.  Sponsorship.  I didn't get sponsored by a coffee company for the second straight Pacific Cup.  I tried to get Leslie's Coffee to sponsor me in 2008, even taking this picture at the halfway point on spec.  But it didn't pan out and now I go to sea sponsorless and coffeeless once again. 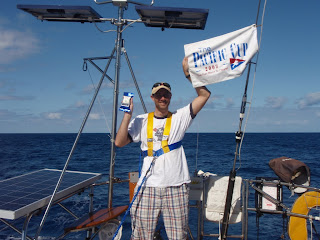 I know how you feel. BMW, Moët et Chandon, and Armani all declined to sponsor my Laser sailing campaign. So, in protest, I have gone over to their competitors. I am driving a Subaru, drinking Mount Gay Rum and wearing an old pair of Levis. That will show them! You don't mess with the Tillerman.

Sorry the coffee deal didn't work out for you. Sponsors can be very picky.

This may not have been the best photo for making your pitch, though. The coffee folks probably mistook your Polka Dot Racing tee shirt for an ordinary PBR number. In combination with the plaid shorts, that would put you way off the urban, hip, 18-35 coffee-drinking market.

Subtle understatement can be a two-edged sword.

This will make absolutely no sense to anyone who is not on your Sailing Examiner mailing list - but in reference to your brilliant study of the effect of spinnaker color on sailboat speed, I would like to offer a link to a parallel study that has been done by a group of eminent kayakologists: The Impact of Color on Boat Performance.

Wait, why are you scared to drink coffee on the open ocean? I'm new to sailing, but a longtime fan of coffee. I'd hate to think I can't combine the two some day...