I've milked a week's worth of posts out of the Three Bridge Fiasco. Actually, more like a month given all of my pre-3BF ramblings. I love the race but the best part was sailing with my old Pac Cup friend. Not that he's old or anything...

I absolutely 100% could not have finished this race without Phil. He helped me sort out the spinnaker rigging, placing blocks, getting the pole set up, and showing me where to lead lines. Once underway, he trimmed the spinnaker while patiently explaining what he was doing. When my driving concentration wavered a quick "watch your course" followed. He taught me some light air tricks such as using the current and the spinnaker trimmed in tight to create apparent wind for yourself. He wore the pirate hat. 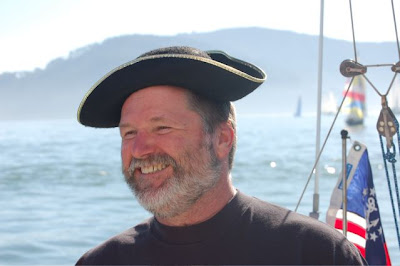 Not that he's a sailing saint or anything...I stocked the frickin' cooler with beer and he didn't finish all of them. Now I'm stuck with beer. He didn't take the tiller from me when it was apparent that I was going to kill us. And the pirate hat *is* on backwards.

But he did help me to point the boat. Christy asked earlier what his secret was. It is actually pretty simple and I bet exactly what you already do. Obviously, you trim the sails in tight (we did not go traveler up though) and then you point the boat higher than you think possible and you watch the telltales. You can ease into pointing up but the second you're too high you drop down fast. Repeat this process. And concentrate concentrate concentrate on those telltales.

I had always been taught to drop down to 45 degrees or so during a tack then ease back up as you pick up boat speed. But in light air, you're losing boat lengths every time you do that so you need to end up your tack at a very close-hauled point. Since we were fighting a current this was absolutely essential. Any time spent perpendicular to the current is lost distance.

I don't know if I explained it very well but it is all obvious when you think about it. I was just always scared to have that windex pointing that close to the front of the boat and have never spent that much time steering to the telltales.

I got the best email from him the next day. Obviously, he had fun but when his wife asked him whether we'd flown the kite he said, "hell yeah, 4 times!" Now that's enthusiasm, but then she asked, "and how many times in the Pacific Cup?" In our 21 mile race we set the spinnaker 3 more times than in our 2100 mile TransOceanicVoyage. See, I like sailing with Phil because he finds that as funny as I do.

Ok, I give up, the header shot is driving me nuts. Did you mirror that shot? Is that the Bay Bridge and Coit Tower in the background? If so, my understanding of geography tells me that it must be a parallel universe.

this picture was taken during a fiasco...all applicable laws of physics are suspended....

Thanks, EVK4. Yep, that's exactly what I do. Playing the telltales is such a blast. I was concerned that there was some kind of West Coast hoodoo that you all use to point higher than we Midwest/East Coast sailors.

agreed, the blog header is cool!