We really should get our own start. David, of Never Sea Land fame, is in. I'm in. O Docker is making noises about joining. Captain John, of Ayala Sandbox, is looking to do it. Zen should do it. That would be five if we could pull it off. Probably more considering I don't keep up with all the blogs the way I should.

There's something similar over at Sailing Anarchy. War Dog started it last year with a bottle of rum to the winner and The Editor sent some t-shirts up our way to encourage interaction in the real world. It was nice, I met three different racers, two of whom also sailed in the Pac Cup that summer. This year, of the 131 boats entered this morning 19 were joining the SA festivities.

Which brings me to my point, the last two years have had just under 300 entries. It would be great to top 300 this year. I can guarantee you that you have not experienced life if you haven't participated in a Three Bridge Fiasco starting line. 300 boats with various starting times 63 seconds apart can go either direction with a pre-start on either side of the line. Last year was an absolute blast shooting down the city front at 7 knots on starboard watching all the pre-starters scatter away from my "Invisible Bubble of Starboard Righteousness".

If you're a blogger (or just play one on the internet) and want to join in on the festivities, I'm offering a custom-designed badge graphic to the winner of the 3BF Blogger Division to be proudly displayed on your blog (or profile if you're O Docker). Join the fun, place a comment to this post if you want to be in the "blogger division".

Update: Winner will receive a badge something like this but with a lot more pomp and official-ness to it. This was just a quick and dirty in case people had no idea what I was talking about: 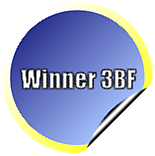 We're in, and we'be been practicing. So watch out. Plus, we don't keep a good lookout and can't remember COLREGS so you'ld best keep your distance, starboard bubble be damned!

Colregs? What does dish soap have to do with this?

I'm talking about the fenders I hang over the side!

Tillerman, I will promise to get you a ride if you fly out here for the race. And, I meant toothpaste not dish soap above...somehow the colgate/palmolive joke was so bad that I subconsciously messed it up.

Colregs, is the acronym for: “International Regulations for Avoiding Collisions at Sea”, and I have no idea what language results in that acronym. Chapman goes on and on about this. When vessels are on a reciprocal courses, the number of sound signals that have to be exchanged and answered depending on what type of vessels are involved, you might as well be washing dishes for the good it will do you in the 3BF.

‘Just don’t hit anything’ is a perfectly good way to survive the start.

Yes, Tillerman, you are missing out! get on a plane, we'll get you on a boat.

Can I join? No blog but I always read EVK4 and Tillerman. If I win I'll proudly display the logo on my web page, which is pretty boring as it stands. First 3BF on my own boat, and with my wife as crew (her 1st 3BF). We always forget to stow the fenders so look for us out there.

Hmmm. This is getting serious. Edward is taking over as community organizer. I am going to have to counter with a Bloggers Division at a major east coast Laser regatta this summer.

I believe COLREGS is not an acronym in the traditional sense, but an abbreviation in the military style: COLlision REGulationS.

Meanwhile, Tillerman, let's work on holding our own regatta just for bloggers (and blog commenters).

I think I might just row out by Alcatraz and watch you guys motor by.

I checked the entries and the Hunter 170 would either be the second smallest boat or three feet undeg the limit (if the one boat listed at ten feet is not a typo). So we aren't entering Love and Coconuts for fear of winning the division and our success going to our heads and having to live with the problems that entails.

Can't see the date for this thing on my iPhone, but I'll fly down from PDX if I can crew with someone.

Breezetrees, you're in! Especially since you took a picture of Lady Bug last year, that gives you some extra points towards the grand prize.

Carol Anne/Tillerman, I think the best bet would be a Laser Blogger Division in the Bermuda 1-2.

I'm up for it, I could borrow a boat from the City of Oakland fleet or perhaps use my old boat, which now lives in Richmond. However I may have to work that weekend for OCSC. I will not know if that is so until just a few days before the event. How much time do I have to Reg.?

I have been following your blog for a while and the 3BF sounds fun. But not this year. Have fun!

The O Dock Challenge is wending its way through the legal morass of entering.

We're officially entered - sort of. I still don't have a PHRF certificate, which is a joke since this is the most stock, off-the-rack Catalina 30 ever to come down the ways - except for the secret canting keel mods I've artfully concealed in the bilge.

And why does YRA care about 'MGM' anyway? I've negotiated all video rights with Universal Studios.

O Docker, I see you on there...so we have four confirmed: EVK4, O Docker, Never Sea Land, and Breezetrees. Captain John is working on getting a boat ready but I am banking on him signing up by 1/21 so we can meet at the skipper's meeting!

Mmm, tempting. I'll try and firm it up this month. If I survive my boat trip on the Thames, my visit to the Excel Boat Show, tapas in Sevilla, and the wrath of the Gypsy Pirate Wench and crew in Key West, then I'll be down there on Friday 1/30. Can stay with my cousins in the city and crew with somebody on Saturday, or drink beer with all when the legends begin at the end of the day.

Have you seen this announcement on Maritime Compass?

G&K, make sure you line up the ride before you get here, it's a shorthanded race, 2 people max, so you can't just go down to the dock and volunteer to be railmeat.

Carol Anne, I knew that COL REGS was military, but I was born in the Peoples Replublic of Berkeley, and am not supposed to acknowledge military like stuff.

And no, I abstained from the demonstration outside the recruiter's office, I don't live in Berkeley anymore.

But I do believe in the Big Boat Rule:

I’m working on getting a boat, but lawyer (layer?) stuff will prevent me from chartering a boat for real dollars to enter. So I have to throw myself and the Admiral onto the mercy of someone who’ll entrust their yacht to us do the 3BF doublehanded. For Free.

There are some N28's availible - with spinnakers (grin).

I should know by the skippers meeting.

If it falls through, I have the J109 ‘Knots Sq’d’ chartered for the event as a spectator/photo platform. We’ll ‘Stand Off’ the start/finish lines a distance prescribed by the COLREGS, pick a direction, and sail around the islands. Fly the chute and have a good time.

Can you let us know which way the chi is flowing at the start?

Oooh, it's on a weekend? Pat and I have two friends who have boats in Richmond ...

Thanks for the invite! No plans to head out at this time. Have fun!

Thanks for the update, Mr. SuperBlog. I'm always looking for an excuse to come home to the City, but didn't realize this one was a single/two-hander only.