Welcome to the Dark Side

Ask anyone that I sail with. Go ahead, ask them. They'll tell you that the majority of the time I'm on the water I'm complaining about motorboats. I don't distinguish between them: fishing boats, commercial trawlers, tankers, tugs, jetskis, ferries. They're all the same. My enemies. And an affront to all that is sailing.

But, that's when I'm sailing. When I'm at my cousin's house and he says, "hey let's take the kids out for a ride", I'm in. His own boat is at the shop right now (hey, another example of what's wrong with stinkpots) but he has a friend's Boston Whaler using his dock. So we hopped on and went for a ride.

Man o man, this was pure fishbilly. Arthur took us out the canal and past the Larkspur ferry terminal, then he opened her up. The two boys and I hung onto a line on the bow and screamed and hollered as we bounced over the waves at a speed that sailboats don't go.

This thing only has a 90HP engine and take a look at this wake: 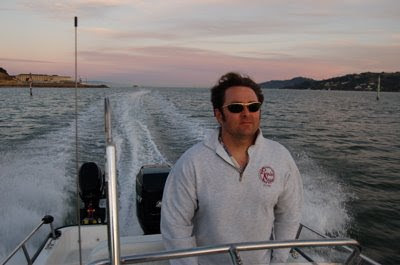 If you can see that ferry in the distance, it was our playpen. As we approached San Quentin, we saw it approaching. Arthur said, hang on we're going for the wake. We bounced over it, zoomed across it and did everything that angers me when I'm sailing. But I had such a big grin I was worried I'd catch flies in my mouth.

The boys had obviously done this before, they had it down. Wave to the ferry, try to get a guard at San Quentin to wave back, yell to their Dad when to speed up. It was cool and exciting. 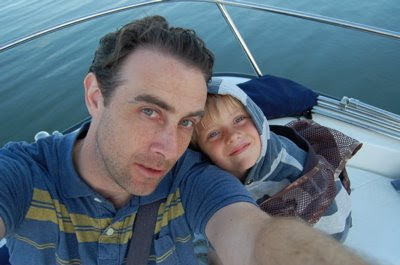 The youngest took us home from the start of the no-wake zone and expertly maneuvered us through the canal without hitting one other boat/bridge/houseboat. Very nice post-dinner ride. And the best part? Dessert was waiting when we got back!

2 blocks from my house and no call or coffee. You cut me deep Edward.

Dog, we use a whaler for all our sailing classes. How else would we rescue the minnows when things go awry. Besides, most sailboats (not my Force 5 or Tillerman's Laser) have engines.

I love all watercraft. That's why I spent all those years in the Navy.

Just spent a day on a sweet power boat, on a practice race for the Mallory Cup quarterfinals that we will be holding this weekend.

Nice, but currently there's a lot of pain at the gas pump. This thing has twin 250 Chevys, and last summer, it cost $1000 to fill up the gas tank, which the owner never did, because he never had the money. This summer, the price is even higher. The sailing club is paying for the gas this weekend for this boat to be used as a committee boat; the $100 worth of gas the club paid for barely made the needle on the gas gauge move at all.

But still, it's a fun boat. And down below, it's appointed like a luxury hotel suite. Zorro's using it as his lodging tonight.

Except ... well ... there's a problem. This boat is 30 years old, and it has its quirks. One of those quirks is that nothing electric on the boat works unless the left engine is running -- it doesn't matter whether the boat is plugged into shore power; the left engine has to be running for anything electrical to work. That means that if the left engine is off, there are no lights, no radio, no anchor winch, no refrigerator, no television.

And this afternoon, the left engine quit on us. So Zorro is in the dark and unentertained.

But still, that boat is a lot of fun, and if I owned an oilfield and could afford to refuel, I wouldn't mind owning such a boat.

Everybody and everything has a dark side.

Where was I? Where am I?

PLASPHEMY! So, how fast do you think you were going?

My natural instinct is to hate stinkpots but since I occasionally fish while sailing, I usually yield to fishermen even though by the COLREGS they have to yield to me. I just understand what it's like to troll 300 feet of line behind you. It's less work for me to give way.

Anyway, I've been thinking about getting rid of my motor entirely. Hell, we may all have to if the new EPA rules pass in September requiring us all the put motor cooling water in a holding tank. The new regs will essentiallly kill recreational boating in the US but no one seems to be noticiing it. Here's more info from BoatUS.

The boat that Carol Anne was using as the race committee finish had 350 hp engines but a max speed of about 10 mph because of its "issues".
On the other hand (OTOH), her thirty-foot sailboat has no engine.