Even a Coconut Could Do It

Oftentimes when people start gushing about how amazing I must be to sail to Hawaii, I tell them that if you threw a coconut in the water in Berkeley, it would eventually make it to Hawaii. There are currents and tradewinds and all sorts of factors that make getting the boat there (eventually) not the most difficult proposition.

The Atlantic has the same situation. Something called the Atlantic Circle. It combines a few oceanic currents, a few tradewinds and a big billowing high pressure zone smack in the middle. You go up the coast of America, across, down the coast of Europe and across. Easy peasy.

But, still, robots doing it? Of course. The Microtransat is a race of robot-boats from Portugal to the Caribbean (officially: between 10 degrees and 25 degrees North and 60 degrees West). Here's what they say about the race: "The Microtransat Challenge is a transatlantic race of fully autonomous sailing boats." 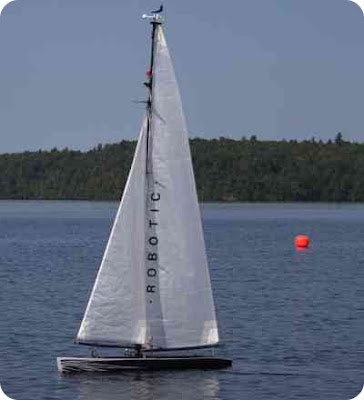 darnit, a quick search reveals that everyone is using the robotic sailing overlords line.

Hmmm. Could a banana do it?

I think bananas are buoyant. If they are, then yes, a banana could make it to Hawaii. Of course, said banana will experience scads of bad luck on the voyage.

I use coconuts as an example because on the west coast of Scotland and Ireland there are climate-incorrect palm trees caused by the Atlantic's currents bringing coconuts there from the Caribbean.

What would you figure the PHRF of a coconut to be? Sure hope we can beat it.

Fullandby, that is an excellent question. Gotta be a pretty high number. They're mostly waterline but their D/L ratio is absurdly low so there is no way it can go to weather. The sail area consists of those little strands of hair, maybe .003 sf? I'll put the coconut at roughly 198, equivalent to my boat.

Your robot overlord would be considered an ISAF Cat 3 only if you pay it.

I always thought the ISAF Executive Committee were our robotic sailing overlords. They certainly act like it sometimes.

Leave it to some computer geeks to find a way to go sailing without actually being on the boat. Do we really want a microchip calling tactics? Are they already at work on gizmos that will sail our boat back from Cabo for us? Or, uh, Hawaii?

Checking out the website for the No-handed Transat, looks like some of the boats are about Laser-sized. Maybe Tillerman should take up the gauntlet and show 'em how it's done. He could become the John Henry of sailing. Has anyone ever crossed the pond in a Laser?

o docker, the rules for the Microtransat set a maximum hull length of 4 meters. A Laser hull is just over 4 meters so all of these robot boats are approx. Laser sized or smaller.

Nobody has crossed the Atlantic in a Laser. I think one of the longest journeys in a Laser was Michael Blackburn's crossing of the 117nm Bass Strait from Tasmania to the Australian mainland in 2005.