While heading up the estuary this past Saturday, Garrett and I had a curious exchange. He started it with what must have seemed like a benign request, "can you put in the third reef?" Instead of just doing it, I reminded him that the third reef is the highest one, meaning very little sail area. I'm pretty sure I was looking at him like he had just grown a third ear.

Garrett stared back at me like I had never been on a sailboat before. "Of course that's the third reef, why are you telling me this?" {that's paraphrased by the way} So I said something along the lines of, "you mean the third reef, the green one? the one way at the top of the sail?"

It was obvious there was a problem at this point so I just did it figuring that some time in the next 5 minutes he'd figure out that we only had 5 knots of wind. He didn't apparently. I had a bite of lunch while ruminating on this odd series of events then went back to confront him again.

I said, "what's wrong with you and your third reef? Am I going to have to mutiny the crew?" I was getting angry and the prospect of taking over this fine yacht had me especially heated.

Garrett was calm, perhaps sensing that he might lose his boat. He pointed out the emergency rudder and commented that perhaps we might want to test this fine piece of equipment with less loads on it initially. I pondered this, withdrew my mutiny demands, and asked if we could perhaps sail with the second reef once it passed the third reef test. 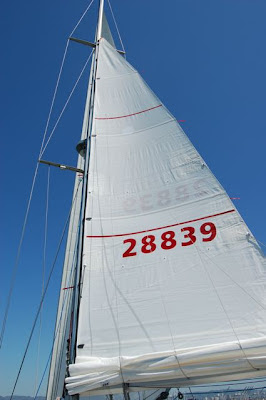 Done. The emergency rudder passed the test, we got to sail with enough sail area, and Garrett survived his first attempted mutiny. We're going to make a fine Trans-Oceanic Crew.

Hmmm. I guess I don't understand anything about the concept of sailing a boat with more than one person on board.

Is there something in the Skippers Code that prevented him from explaining why he wanted the third reef in. Sure, if you're in survival conditions in the Southern Ocean I understand why a skipper's orders have to be brief and obeyed immediately. But on a training cruise in 5 knots what stopped him from explaining his thinking?

Likewise, is there something in the Crew Code that prevented you from asking him politely to explain why he wanted you to do something whose reason you didn't understand?

Is it a bit like the Male Drivers' Code that doesn't allow us to ask for directions when we're driving a car?

We just both thought what we were thinking was so obvious that it didn't bear saying. So I think it's the last one.

Of course, and please don't tell anyone this, I made up great portions of this story to turn it into a bloggable event.

On another note, what kind of laser has a headsail? I saw one on Saturday and was quite confused. I didn't think you guys knew how to sail with multiple sails?

Gerald recently bought a Laser II, and since he greatly enjoyed his recent trip to Germany, I'm sure he'd enjoy returning to participate in the world championships -- although I'm not sure about an event that lasts until July 136th.