The Way It Should Be Done

Amid the mess that is the 1000 days at sea voyage, it's easy to lose track of one important nautical fact. People should go to sea. They should say "what the fudge", pack up their belongings and cross an ocean. They should learn as they go. And they should experience everything that this voyage offers.

There's one such voyage that I've been following for several months. A young Australian was living/working in Northern Europe, got the itch to sail home, bought a boat, learned to sail, and had a heck of a time financing this voyage. He laid it all out completely honestly in his blog and worked his ass off to make it work.

The fascinating thing to me is the amount of goodwill that comes his way from people he's meeting in ports along the way. Every time he thinks he's stuck, he finds a way to make it work, either he gets a job or someone helps him and he keeps moving on.

Well, he has started his trip and has a great story of his stay in Laxe. I don't want to give away too much since I really want people to click on that link but the gist of the story is that in troubling weather conditions, he makes his way into port, has his boat in a difficult position but meets enough people who out of pure goodness help him out so that he and his boat make it through nicely.

I've been in many (a dozen maybe) foreign ports and have met many people but never have I been so welcomed and helped out the way this guy has. I'm sure Nick is a super-nice guy but I have to think it's the cool red boat, I have to get me some flashy red topsides. 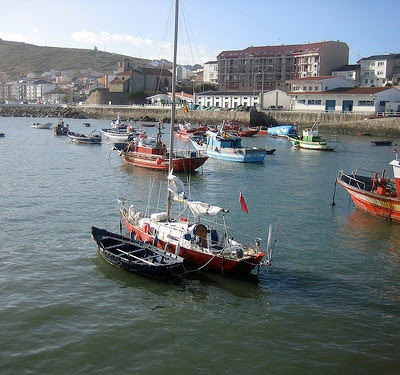 People like this make up the majority of sailors on the open ocean and not the 1000 day crackpots. Bookmark Bigoceans to read the ongoing story of how it should be done.

So what makes Reid and Soanya crackpots and Nick some kind of hero in your book? Reid and Nick both seem to know more about ocean voyaging than I do. And from what I can tell Reid has more hours under his belt than Nick. They both set out on the ocean, make some mistakes, work around those mistakes, somehow survive. Why do you praise Nick and heap scorn on Reid? I just don't get it.

That is a very legitimate question.

The first answer is that I don't see Nick as a hero just an example of somebody doing something that should be done. And he appears to be a good guy. I lump most ocean voyagers in this category.

Why do I dislike Reid? Hmm, I'm not sure I dislike him. What I truly enjoy is parodying his absurdly ridiculous writing. I'm pretty sure he's an idiot but I can't hold that against him, a lot of people are idiots.

(long pause while I think about this)

I guess what I dislike about Reid is that going out to sea on a leaking underprepared shell of a boat should be a private matter and not get the amount of publicity that he gets.

Impressionable people could think that's the way to do it and go about the matter in a manifestly unsafe way. Think Ken Barnes.

I'd rather more people be sailing the seas than fewer. But I sure would like them to follow the example of Nick, my neighbor Chris, or even how I did it. Prepared and using a proper autopilot not a piece of wood named sqawk. Possibly cleaning the bottom of your boat before departing. And following through with the heart-shape, that's important.

oh yeah, and the drifting at 1-2 knots for months at end while proclaiming that he's helping mankind. I actually dislike that.

The real sailing idiot is David Vann. I just read his book A Mile Down. I've never heard any story about poor planning that's that bad. The list is too long, but here are a few things:

- When his rudder fell off in the Atlantic (because of that shoddy construction) he abandoned ship, even though his boat was floating fine and not taking any water. Then, the boat that "rescued" his crew claimed salvage rights to his abandoned craft.

- That 90-footer finally sank all due to his idiocy, poor planning, and "get-there-itis".

- He's now building a 90 foot aluminum trimaran in his backyard for $25K which he plans to sail around the world in.

I hope he dies before he risks the lives of some far off coast guard that has to save him.

Reid Stowe is an odd bird, but he's nowhere near as bad as Vann. Read his book; it's true.