Most Wonderful Time of the Year

Well, not really. I mean, the sailing's good but lordy it's cold out there. It was quite possibly the coldest weather in which I've ever deliberately set sail. Damn, I had to put my sweatshirt on. I don't think it's what "those people" mean by frostbiting but it certainly wasn't weather for civilized folk.

Thankfully, we aren't civilized because it turned out to be a right-fine good day for a sail. It was Niley and his daughter's first time out sailing in the Bay after many just-missed chances over the last year. Camille was a great hostess, basically disappearing down below with M (an initial not her real name). They re-appeared after the upwind portion of our journey much warmer than we were and sporting home-made crowns befitting the yachting royalty that they are.

Niley immediately took to sailing, grabbed the helm and steered a torrid 5+ knots upwind to just past Treasure Island. 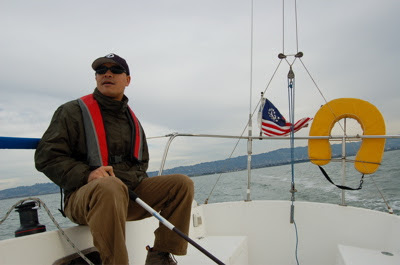 At this point, the girls emerged, crowns and sandwiches in hand. Knowing it was warmer downwind, we flipped a b*tch (tacked for you landlubbers) and headed for home. Both Camille and M. took a turn at the helm and patiently waited while the wind died and the Bosun's Chair Express Super-Ride waited.

On this agonizingly slow downind leg we saw the rarest of all sights, our old boat, Polka Dot. She's Alive! 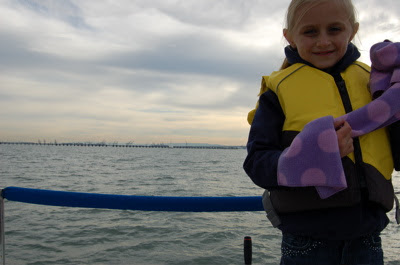 I have included Camille in the frame for reference to exactly how small a boat a C22 is.

This was probably our last sail of the year, so in case you don't hear it somewhere else first. Happy Holidays from Polka Dot Racing.