The Best Sailor in the World

I like The Google. I use it constantly; it makes me a better person. Today, on a lark (something I am given to, larks), I googled the best sailor in the world. Mainly to find out if I've finally been recognized as such but also out of curiosity on what The Google thinks.

The results are surprising...Sailor Moon (some sort of anime person) comes up first. And the second, actual sailing-related, answer didn't shed any more light on the real question but did have this quote: Some of the best sailors in the world sail the Lightning.

Now I have to know more about this boat if some of the best sailors in the world sail it. And if The Google supports that theory. Here's a few Lightnings in their native habitat: 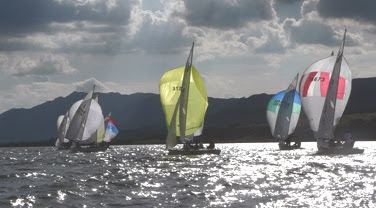 It's an S&S design, the "rig is simple, but offers sophisticated sail shape controls", and "there's room in the cockpit for two couples or a family to daysail". 19 feet, big OD fleet, some of the best sailors in the world, that sounds nice.

David Dellenbaugh, former Lightning World Champion and AC helmsman, even has a top ten list (a la Tillerman), in which he states "Lightning sailors sail hard, but they're not too cutthroat". Sounds like a nice boat for the best sailor in the world.

Very well, but what do the cutest sailors in the world sail?

Sadly, The Google isn't giving anything up on that subject that is fit to print within a fine family publication such as this.

OK, you've tipped the balance with that post.. now when I do a search:

It's you that comes first, ISAF next and then the Lightening class... dude you made it to number one!

sailor moon is a girl, and sorry although not real I think is cutier than you...sorry dude