A nasty surprise awaited the crew first thing on Sunday morning. Lady Bug had been infiltrated by a nasty dangerous predator. We were going about the normal routine: hanking on sails, removing covers, rigging sheets, putting on sunscreen....but wait that last one was never done. Sitting on top of the sunscreen was a freakin' Praying Mantis (known as a mantid to those who care). 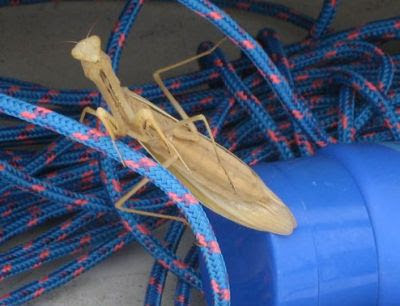 For the first picture, the dangerous beast was calmly hanging out on the jib downhaul, by the second picture he (or she) was in Full-on Attack Mode (FAM). See those little legs ready to pounce? Needless to say, I put on my Captain's Hat and started barking orders..."you, nameless crew member, capture that villainous creature!" And immediately stepped back on to the dock awaiting the capture.

Minutes later, the Insect of the Damned decided he/she was not going to be captured and receded to the furthest reaches of the lazarette (or whatever the heck that thing is called where I put winch handles). We didn't have a choice, we had to ignore him/her. By the end of the day, we were stuffing GPS's, winch handles, water bottles in there as per usual with no thought of our deadly stowaway.

Of course, we did so only after a quick google search turned up this gem:
"Beware: praying mantids will eat other beneficial insects if pests are not available; however, they will not eat ladybugs because they are bitter."

Yeah, don't you just hate the taste of ladybugs? Worse than broccoli.

They're not too bad if you stir fry them with plenty of garlic and soy sauce but those wretched orange, spotty skins will still stick in your teeth.

HEYYYYY Praying Mantis are the coolest!!
Hmmm maybe I need to have my praying mantis kung fu school brotheren come visit and explain how benificial they are to human kind and perhaps demo a few of the skills that a Mantis uses to keep pests under control... what think ye Knave...hmmmm

So now Tillerman's 100 things about me list will have to go to 103 with the addition of...

I hate the taste of ladybugs and the way they stick to my teeth...

I hate the taste of ladybugs and the way they stick to my teeth...

I hate the taste of ladybugs and the way they stick to my teeth.

I read somewhere that Bernard Montessier kept a small lizard on his boat, as a pet, to deal with all the insects.

You must get a lizard!

Good for you for meeting the challenge with calm, strong leadership.

On my ship, the orders would have been "Crew, fetch me my yellow pants!" followed by "Abandon ship!"

I absolutely need to use that line, "Crew, fetch me my yellow pants." I dare anyone to describe a situation where saying that is inappropriate.

Crew, fetch me my yellow pants!

There is one situation in which ordering the crew to fetch the yellow pants is not appropriate ...

That's when things get to the point that you need to yell, "Bring me my brown trousers!"

And, of course, "Bring me my brown trousers" is the fall-back position from when you can't quite mangage, "Aaargh, me cabin boy. Fetch me mine red shirt!"

Zen, we've been referring to this distant past episode on Five O'Clock Somewhere: Captain Courageous and the Pirates: http://itsfiveoclocksomewhere.blogspot.com/2006/02/captain-courageous-and-pirates.html

But I also agree with Zen that mantids are great creatures to have around. You think they look scary when you're 6 feet tall, but they're only 6 inches long? Well, they're probably really scary to a sapsucking fly larva that's only 0.6 inches long.

The big problem with having a mantid on a boat is that there's not likely much on board for the mantid to eat, unless you have an onboard herb garden or the like that needs protection from predatory insects. Then you can put the mantid on guard duty, protecting your herb garden from marauding aphids. If you don't have a garden on board the boat, you should take the mantid home to protect your home garden.

Hey! I have a praying mantis now!

Only mine's a nice sensible landlubber mantid who's taken up residence in my little garden. I'm VERY happy about that.