That's the trifecta for sure so I guess I like this project. A Dutch man, Robert McDonald, has made a 15-metre replica of a Viking ship with five million ice cream sticks. He's apparently going to cross the Atlantic Ocean in it. 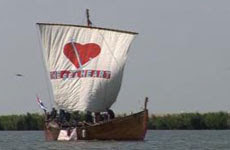 The ship was glued together with help from over 5,000 children. It's unclear from the article I keep paraphrasing whether the kids contributed the sticks or helped with the gluing.

A boat made of popsicle sticks. What are they going to think of next?