Yay! Harley in Seabiscuit is back at it. But now he's going to be part of some organized chaos called Around in Ten, a race around the world in 10 foot boats. This is Nemesis....the successor to Seabiscuit: 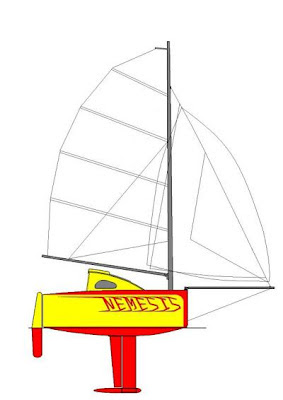 This is going to rock, they even have a forum! Unfortunately the race doesn't start until early 2009 but hey, that's only a year and a half away. I'm rooting for Harley and sincerely rooting for a better boat design for him.

A boat made of reeds, a couple trying to stay at sea for 1000 days. Now this. Doesn't anyone think a nice comfy Swan is the way to go anymore?

Of course one of my favorite things about blogs is how many nutty, improbable adventures they allow me to enjoy vicariously. I LOVE that stuff. As long as everybody comes home alive of course (knock wood). Thanks for the lead!

wait, where's the boat made of reeds? I missed that one.

After over a year old Harley of SeaBusciut Fame, Who never left the dock, still has not started building the new bost, Where does he jump to next? maybe moving up to a Swan!