Opening Day was this past Sunday. After being blessed by the USCG Cutter Tern, we shot over to Angel Island for a hike and picnic lunch. Great time had by all and the sun even finally decided to make an appearance. About 3PM, it was time to go.

We had just left the dock at Ayala Cove when we saw it. A freakin' humpback whale. We'll call him Barney.

The great beast surfaced about 20 feet from us, probably looked around and realized that he was heading into the most crowded part of the Bay on its most crowded day, then dived down and took off. I say that because we never saw Barney again.

The kids were all down below so they missed it. I'd have turned around except it was now time to start worrying about the 20+ knots of wind but that's a story for another post. We didn't have time to snap a picture so I'll give you this map of Angel Island to look at and try to imagine it. Barney surfaced right in front of that ferry in the picture which looks surprisingly similar to the real-life ferry that was heading over to dock at that moment. Weird. 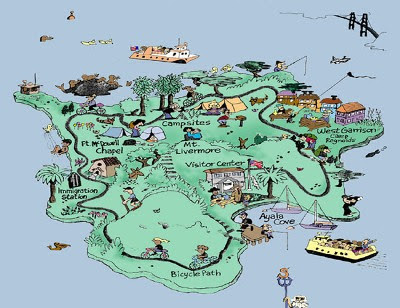 Very Cool!
Now thats something you do not see everyday

interesting to consider the connection between the whale post and the april 25 one . . . what if you'd hooked barney??!@#!