Then the wind died. But not everywhere. Those that went right had the wind for about an extra 20 minutes. We were in a complete calm but could see the wind line about 100 yards in front of us. We just couldn't get there. The boats that had went right didn't have their wind die until they got to the windward mark, but they were now about a mile ahead of us with no way to catch them. Lesson learned, on the Olympic Circle course, "right is right".

While in this windless state, the boats behind us started bailing. Here's the first: 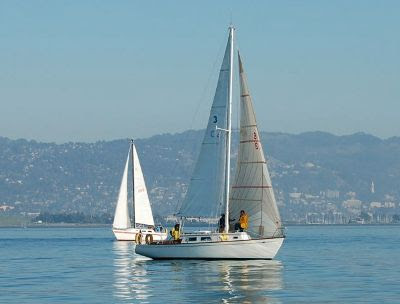 Suzanne heard them say, "we're out of this race, let's go home." Then slowly but surely, the Olson 25 bailed, a C&C 110 bailed, and about five others that didn't have sail logos that I recognized.

We persisted and it took us 45 minutes to go that last mile to the mark as we drifted to a wind patch, sailed it for what it was worth before drifting to the next.

Then the wind filled at the first mark, but from the North! We were going upwind AGAIN. The entire leg towards X we had wind but it was shifting East, basically giving us an entire leg's worth of header so that now our last leg would ALSO be upwind. How the heck do you explain a triangle course with three upwind legs? That has to be one of the definitions of hell.

At this point, I'll fess up, I didn't play the header very well, I kept thinking I had the layline and kept ending up to the right of it. "Umm, Captain, in light winds isn't it best to not tack very often?" Yes but I must have missed that day in class to go sailing or something.

I was very proud that we stayed and were competing with almost half the fleet having bailed but we were coming up against a self-imposed time crunch if any of us were going to make our dinner plans. Thankfully, the winds were holding steady for our final beat to the marina. But, were they? The frickin' marina was ensconced in a cone of stillness. You could see the wind lines around the marina, from any direction you could sail to within a third of a mile of it but would then stop cold.

We tacked over to try the eastern entrance, but as we got within a third of a mile, nothing. Suzanne had a pie to bake for heaven's sake. Finally, after three hours and within spitting distance of the breakwater, we had to fire up the trusty inboard. And in punishment, run aground.

Now that's interesting. Sounds like you borrowed some winds from Elephant Butte lake this weekend. I've lost count of the upwind-downwind courses I've sailed that ended up being upwind-upwind.

Then there's the situation when two boats are sailing toward each other, both running dead downwind with spinnakers flying.