I think my son might just be a natural sailor. I've had a few clues...when he's on the boat, he waddles directly over to the backstay line and starts pulling on it; the first time he saw a cam cleat he tried to get his finger stuck in it; and whenever I pull the "new" spinnaker out in the kitchen, he starts playing with it and stuffing it into its bag. 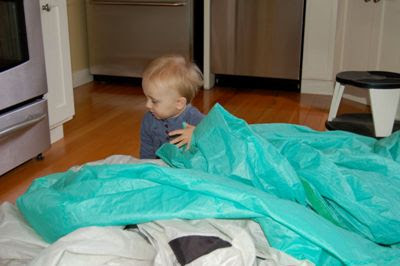 Unfortunately, he also might be destined to be a model. As soon as I pull out the camera, he heads directly for it, confronting the lens as all good models are taught. So, the closest I have to a picture of him playing with the spinnaker is when he has just decided to leave the nylon mess alone and head over to the camera. It's impossible to even sneak up on him as he has a sixth sense for when a camera is around.

Well, it sounds like he is destined to be on the foredeck. He likes to grab the spinnaker and stuff it back into its bag and he likes the camera. We all know that foredeck folks are the most photogenic...I happen to play on that end of the boat quite a bit.

foredeck on a frosty? Hey, whatever happened to your Key West ride that got sunk by Ocean Planet? You should post an update on how the boat's doing.

When I can, I try to get out in boats other than the mighty Frosty. I can tell you that attempting foredeck on one would be lethal. As far as the Key West situation goes (I would have been foredeck on that once great ride) it is a bit of a sad situation in many respects and still has not been completely resolved. I don't really want to make the situation any worse at this point, but as soon as it seems like a good time, I am more than willing to lay out what has happened. I can tell you that the owners of In Theory have been moving ahead. They commissioned a new, all carbon fiber, design from my friend Ross (see today's Eliboat) and Rodger Martin that is going to be very very fast and exciting to sail. She will have wings like her predecessor. The plan is to have this thing built and racing by the summer, and they are building it themselves with help from the extended crew. In the mean time Mark and Mike chartered a locally famous sportboat called Rumors, a Stomp 38 (quite a handful) and won boat of the year honors for boats racing in the various competitive Narraganset bay phrf/irc regattas and series. Their record was pretty amazing actually, and I think they learned a lot from the experience. So I guess that whole disaster in Key West ushered in a very interesting and exciting new phase in the sailing careers of Mark and Mike, two great guys that started sailing very late (in their 40's I think). I think everyone who sailed on the original In Theory will always miss that boat though.

our son "waddles?" what is this? I have never seen this.
signed, his mother