I went down to the marina tonight to check on things, put my neighbor's docklines back to their original configuration and generally enjoy the sea air.

Imagine my shock when I realized that the derelict stinkpot's other dockline was now broken! The d@mned thing was now rubbing against the dock on the other side! 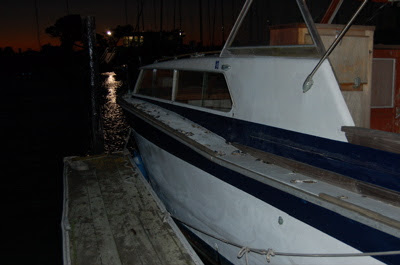 Luckily, the "donated" dock line was an old jib sheet and I had 30+ feet of it, so I secured the thing securely in the middle of the slip after a lengthy internal debate over whether I wanted to chance getting my work clothes dirty boarding the hulk. I snapped a picture of it but somehow that's not compelling blog material to me.

What is compelling is the damage that was being done yesterday. Below is a picture of where the brute was trying to destroy itself against the dock. You can tell it's been happening for some time but there is some fresh wood showing through on the edges of the wound. 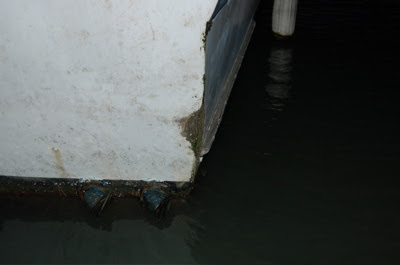 I fixed the situation at the first 40 knot gust on Tuesday. Since then we've had over 24 hours of sustained 20-30 with common 40 knot gusts. I have no doubt it would have worn through if not for my heroic actions. Actually, I say heroic in jest since my first thought upon seeing the situation was, "if that thing sank still tied to the dock, would it damage my boat?". I'm sure Lady Bug considers that heroic.

When I look at a boat like that I think,

50 hours of work removing potential pollutants along with taking out the portlights and hatches and we could make that derelict into a passable artificial reef.