I've sailed with spinnakers before. One time I trimmed a spinnaker. Heck, I've even done foredeck a few times though I'm not sure foredeck on a J105 (sprit boat) counts. But, back to my point, I've never owned a boat with a spinnaker. Or steered or generally been in charge of what's happening. 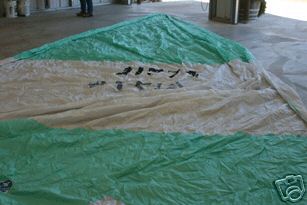 EBay could possibly have changed my sailing life. I finally found a spinnaker in decent shape that was pretty inexpensive. It's a bit undersized for the boat which will hopefully limit the potential for disaster.

I have to rig a few blocks but generally have everything in stock for Harken's recommended deck layout:

I don't have a third halyard but for now I can use the jib halyard until we get the hang of it. And someday I have to go to the top of the mast to replace the anchor light anyway.

Holy crap, Lady Bug is going to be dangerous now.

So would that make it a lady bug with a stinger? Like a lady bugbee.

Have fun. Try flying it without the pole going almost dead-downwind first to get a feel for it.

Litoralis, great tip. I really only got the spinnaker so that sometime this summer I get to yell "blow the guy" in anger. All these years, "blow the vang" was the best butt-saving expletive in my arsenal.