Dramatic Battle with a Tartan 37

Just to set up where we are, the course is 41, windward from the breakwater to Mark G, almost downwind to D, and then a reach home back to the marina. Detailed very crudely here: 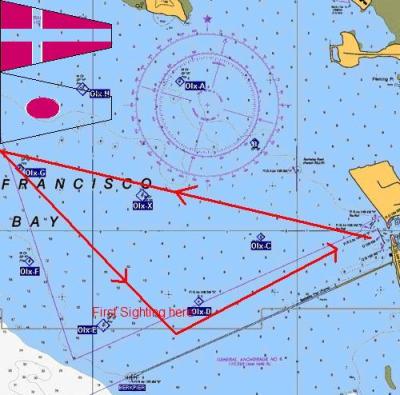 We first saw this Tartan 37 right near mark D, we had gone DDW wing and wing on the way to D, then gybed over to a reach before we hit D. They hadn't had the whisker pole fiasco that we did so they never got so far west that they had reaching room to the mark so they were still DDW wing and wing going to D. It was very apparent that we were heating up and were just behind them going to D.

This didn't look good for us for a few reasons. First, they have 9 feet of waterline on us. They have a big 150 flying (we only have a 110) but at least it was baggy. They rate 126 and we rate 192, they should be faster. It was a reach, pretty much assuring everyone would be going full speed.

Somehow we stayed behind them and pretty close all the way to the breakwater (finish line is the marina entrance behind the breakwater). We got to the breakwater about a boat length behind and leeward of them. We could both make the finish wihout gybing just bearing away to DDW, then heating back up for a reach to the finish. Keep in mind, it's all in about 200 feet in less than 10 knots of wind.

They passed the breakwater first about a boat length ahead and beared (bore?) off, passing in front of us, we pulled in right behind them about half a boat length behind, picked up speed and were pointing at their stern and then their port side, their skipper yelled "coming up" to indicate to us that we either had to come up right then, hit them, or bear off and duck them. We came up, and were now windward of them, picked up speed faster on this reach, stole their wind (well most of it, their rig is 6.5 feet higher than ours) and passed them. But barely, it was too close to call.

We were both inching to the line, I'm frantically waving my life preserver to show we didn't use a spinnaker, but they're in between us and the race deck. They see this and remember to do the same. At the last second, our pulpit peeks out in front of theirs, I hear a whistle, count to 3 and hear their whistle!

We overcame 9 feet of waterline, 66 points of PHRF, and 40 points of LP on the headsail to beat them boat for boat. At the very last second! All of this on a reach where they should have pulled away from us every second of that leg. We passed them by outmaneuvering them in the last 200 feet.

This story is hardly the tense dramatic battle that I made it out to be, but shows the progress we've made as a team. Not only being in the hunt but in a case where we were fighting for a spot, we could maneuver efficiently enough to pick up boat lengths in close battle. We would have still placed much higher than they did corrected, but beating them boat for boat really shows the progress we're making. Polka Dot Racing is now a player in the Chowder Scene.

Wahooo, I was breathless...

Cool! I was picturing it my mind. Exciting stuff. Well done!