It's now routine to lose control of the boat to Cap'n Camille the second we board. So I won't bore you with more pictures of her at the tiller or barking orders.

But she's now starting on new responsibilities. The wind was starting to get a bit spirited as we headed back home from Angel Island on Sunday so I told her that I was going to steer the rest of the day. Her eyes immediately fixed on that red line in my right hand. I took a quick look at the wind-o on top of the mast and realized we weren't about to gybe...it was safe enough so I passed it over to her with a few quick instructions. Ease when I say ease and trim when I say trim. And, silently to myself, steer to the sail trim...those ratchamatics haven't really proven themselves to me yet. 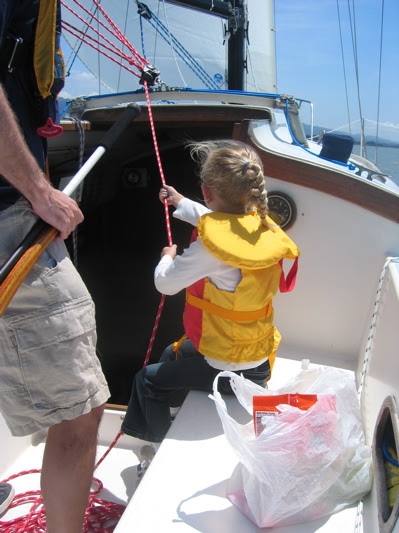 Hopefully, you can see the speed-o buried at 10 knots in the photo. And, yes, it does appear to be grossly out of tune.

When she'd actually eased and tried to trim a few times, I gave her the most important trimming lesson imaginable...keep an eye on your sail. 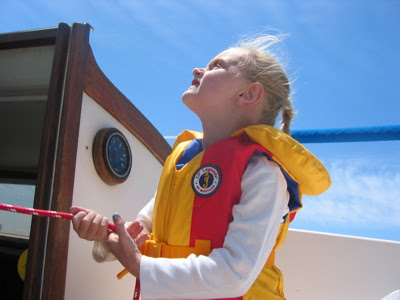 Of course, I never told her what to watch for, but she followed instructions beautifully. Of course, she'll probably have cataracts by the age of 8 from staring at blindingly white sails for so long, but all in the name of boatspeed.

I'm now going to fast forward through my brainfart when I decided we could drop the jib and main inside the marina with the other three hundred boats milling about. One sailing instructor summed it up perfectly as I was sailing past him (he was motoring) and he said, "what're you doing skipper?" and instead of throwing out a smart assed "sailing and waiting for you to get out of my way mr. outboard" I said, "ummm, I guess I'll tack here and drop my sails" then proceeded to get in everyone's way while I tried to wind my way back to my slip. I think I had right of way on everyone since they all had the sense to be motoring through there but I sure as hell looked out of control and crazy. Hmmm, I didn't fast forward very well there did I?

Anyway, once we made it back safely and were no longer endangering other boats, Camille decided that she'd had so much fun that we weren't quite going to go home yet. We turned the boat into an amusement park and played for another 2 hours: 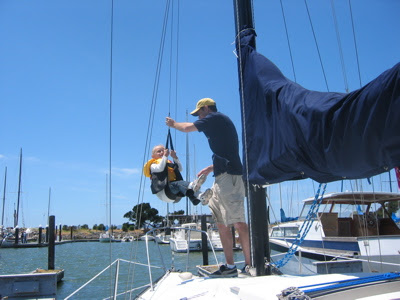 The perfect day after not sailing for so long. And I haven't even gotten into how nice the new sails and running rigging are.

CK rocks, as usual. Do you have a pink Vespa for her yet?

Concerning right of way: I'm no expert on sea law, but you've taught me that you have right of way on every boat powered by a motor, and any sail boat that isn't clean and/or skippered by someone annoying.

This time it was me being the annoying boat....oh well, made it back safely and didn't cause any fiberglass damage to others.

I can see it now. The teenager, wanting to borrow the keys to the Boat, more than the car, hahah

You know you can not buy memories like you are having with your daughter. They are a treasure to hold.


My Memorial Day "sail" was less than perfect. However, re-thinking that.. perfect is perception is it not...
So I will rephase that, my memorial Day sail was also perfect.

The sun was out, I was warm and going somewhere on my boat and made it, safely.

Like you & CK I had a perfect day. thanks for asking.


As far as being the annoying boat... we all are both yin and yang, sometimes more one than the other...It was just your turn to be talked about hahah
With no damage and safe, you made a profit.

I suspect that "what're you doing skipper?" was a polite way of saying,"Hey - I'm trying to keep out your way but as you are zig-zagging around like a madman and running backwards and forwards on your boat and waving your arms around and shouting incomprehensible commands at that cute little kid, I have no idea which way you are going to go next so please give me a clue so I can avoid you."

Tillerman, throw in a little "are you on drugs?" and that's an exact interpretation.

Of course, the cute kid makes up for a lot of your sins. Have to get her some nice sunglasses though... help prevent the cataracts and all. Besides good sunglasses look cool.

Tadpole got some really awesome sunglasses when he was about Camille's age. I have pictures, but they're printed on paper and thus not convenient to upload.

Yeah, zen, Tad already is more interested in borrowing the boat than the car ... he has to earn it, though.

Sounds like you need to watchout or you'll be losing the tiller to her and you won't get a look in.

There's also a Camille at the Heron Lake marina ... maybe about three or four years old? Associated with a a boat named "Spar Trek", which should be suffienciently pun-ishing.