I took the new sails out for some exercise this morning, camera in hand to capture the majesty of their stark white crispiness. I had a great time tooling around the circle, going back and forth to get pictures on both tacks. It is, of course, impossible to get good pictures of your sails singlehanded, but I was giving it a good effort.

I was sailing towards the pier on starboard tack and saw a J/24 beating out on port. Pretty close to a collision course, but I was pretty sure he'd pass my stern. Sure enough, he did by about 4 boat lengths. No harm no foul.

BUT I had my camera in hand so I thought I'd snap a picture once I was positive we'd clear. SNAP!

The guy jokingly yelled "Evidence!!!" (Non-sailor explanation: The joke was that I had right of way being on starboard tack and if he'd hit me it would have been his fault. It's not funny to non-sailors, I know that.) He obviously wanted some props that he was such a good sailor that he could come a few boat lengths from me. So, I jokingly yelled, "I was just getting a shot of YOUR FENDERS!" 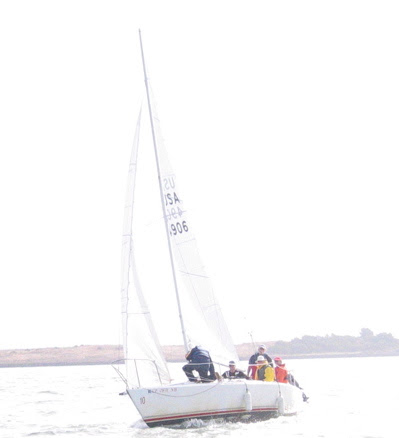 His response: " AIIGGGHHHH!!!!" and then a very loud yell at his crew to get those fenders on board.

Now, I actually feel bad about that. How embarassing to have your racing (notice the bow-number) J/24 mocked by a guy in a Catalina 22. In front of your crew. While singlehanding. I feel bad, Mr. J/24 Number 4906, that was uncalled for but for the love of all that is nautical, get that crew in shape.

Ha ha. Good piece of one-upmanship on the J24 guy.

But can I ask a naive question? I know that it's considered bad form to leave your fenders ahnging over the side while sailing. But as a perennial small boat sailor (no fenders on a Laser) I've never understood why.

Do they drag in the water and slow you down? Or is there some other reason?

For the average recreational sailor I suspect that there's a much bigger price to pay if you forget to put your fenders back out before returning to the dock. So why is it so non-U to leave them hanging there all the time?

My reason for bringing it up is to be snarky. But that's just me.

The reasons that it's such an issue is the drag and the potential to foul your propeller. And if you lose them, you won't have a fender to put back on at the dock. This guy is a racer, I'm pretty sure the drag/speed issue bothered him the most.

I actually figured out who this guy is and am going to send him a note because if you think about it I couldn't have possibly known about the fenders until AFTER the crossing and my camera was already in hand. I just wanted to get a photo for someone in my marina...the problem is he won't want it with the fenders dangling there.

A few boat lengths? He was being nice. Most of the J/24 guys, that I know, would have given you about 3 feet. Or, if they were racing, 3 inches.

Fenders out just looks goofy. I also have been embarrassed by the occasional "fender left overboard" issue.

It's shipshape to bring fenders aboard. Enough said. Farmers and
such like leave them dangling.

Salty, what would a farmer do with a fender? Keep the tractor from bumping into a fence or something? Protect the cows from tipping damage?

I love that you totally humiliated the guy, but felt bad enough to stalk him to send your apologies. You don't have it in you to be a dick.

"Now, I actually feel bad about that. How embarassing to have your racing (notice the bow-number) J/24"

The bow number actually identifies the boat as one of the J24's in OCSC's fleet, it doesn't signify that the boat 'races'.

However, most of the OCSC fleet is 'in charter', meaning that OCSC doesn't own them, the owner may in fact be a racing skipper.